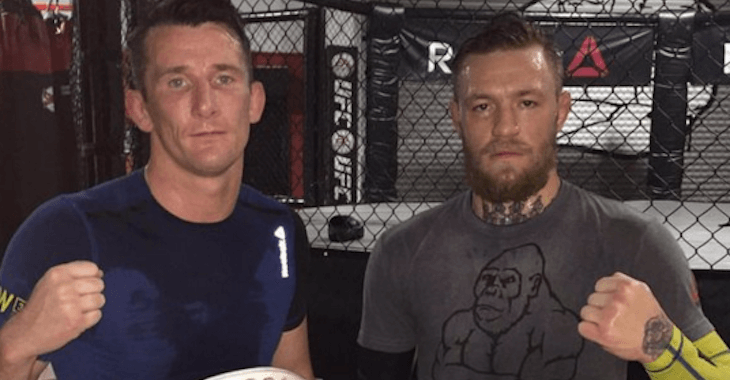 Conor McGregor has proven time and time again that fans should think twice before they doubt him. Behind every great fighter is a great team, and this situation is no different; John Kavanagh and Primal MMA head coach Owen Roddy help McGregor craft his gameplans and aid him through his training camps that lead him to the octagon.

When naysayers were making fun of the fact that McGregor was throwing elbows from the bottom at “UFC 189” while Chad Mendes was on top of him, Coach Kavanagh was calm and laughing in his corner confident that his fighter would come out on top. Lo and behond, McGregor not only made it back to his feet but he knocked Mendes out moments later to become the interim featherweight champion.

Coach Kavanagh, Owen Roddy and McGregor are preparing themselves for their greatest challenge to date in Jose Aldo at “UFC 194” in December. The bout was scheduled to take place at “UFC 189”, but Aldo was forced to pull out due to a rib injury. McGregor, Roddy and Kavanagh have had an extended amount of time to break down Aldo’s fighting style and it’s possibly they’ve painted the perfect gameplan.

As for the rest of the roster, McGregor claims it’s not a good thing that you’re standing across the octagon from him with Owen Roddy his corner.

You do not want us dissecting your game and plotting your demise. Sunday work with Roddy. #SBG #Primal #UNIFY pic.twitter.com/y679bI3BbF

Who do you think will come out on top when Jose Aldo and Conor McGregor meet at “UFC 194”? Share your thoughts and make your predictions in the comment section below!