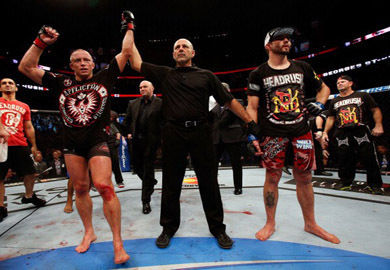 With a rare insight into both their styles, “The Natural Born Killer” believes that GSP will take victory at UFC !58.

Here is what Condit told the good guys over at MMAInterviews:

“I think that Georges [St. Pierre] has the tools and the athleticism to beat Nick [Diaz]. I’m not counting Nick out, though. He’s a tough fighter. He can put guys in back positions and you never know, but I would put my money on GSP retaining the title.”