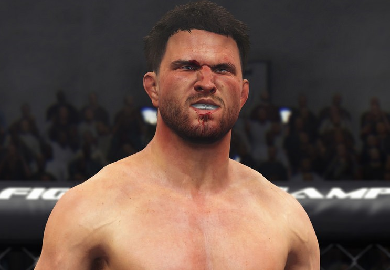 If you picked up the new EA UFC video game, don’t be surprised when you see a cleaned up Carlos Condit.

According to a report over at The Wall Street Journal a history of legal issues is to blame.

Last year he settled the lawsuit for an undisclosed sum, he said.

“They’re doing it without consulting the original artists, and that’s what makes it illegal,” he said. “I’m the little guy in this situation.”

Such lawsuits have left a mark. When videogame giant EA Sports, a brand of Electronic Arts Inc., developed its own fighting game featuring Mr. Condit, which will be released this week, it left out the lion, causing gamers to growl. Electronic Arts declined to comment.

“That tattoo artist must feel he now owns a portion of carlos condits rib cage too huh?” wrote one fan on an EA online forum after seeing early screenshots.

Mr. Escobedo, 35 years old, said gamers sent him hate emails and attacked him on his Facebook page after news broke of his lawsuit. He said he has known Mr. Condit since the latter was a teenager, but the litigation has spoiled their friendship. The sports-management company representing Mr. Condit declined to comment.