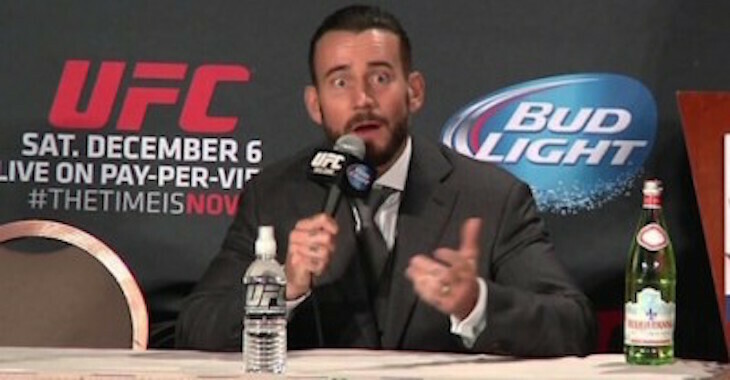 Since announcing earlier this year that he would make his MMA debut under the UFC banner, CM Punk has been on the receiving end of some pretty harsh criticism. Some believe that the move is simply a publicity stunt, while others believe CM Punk is in for a rude awakening, despite the fact that he is training under Duke Roufus alongside elite level fighters such as Anthony Pettis.

He spoke on The MMA Hour to discuss his critics, and lay out a timeline for his UFC debut after suffering a minor setback due to a shoulder injury.

“I deal with enough shit and that last thing I need is some phony journalist saying, ‘he’s faking it and he’s never going to fight.’ Fuck off, pal. Who told you it was okay to write a book? Who made you a journalist? I don’t know why people are so concerned about what the fuck I’m doing. If you don’t like a book somebody wrote don’t read it. if you don’t like a TV show, don’t watch it. If you’re mad that somebody’s remaking, ‘Big Trouble In Little China’ and it’s your favorite movie, guess what, don’t watch the remake. If you don’t want to watch me fight, don’t watch me fight. We made the announcement 10 months ago and obviously I should have fought by now. I think it has a lot to do with impulsive people. They have a short attention span. It’s nice that they want to see me fight. as much as they pretend that, ‘Oh this is terrible for the sport, we hate him. We’re not going to support it.’ Yeah, you’re going to watch it. And they want to watch it, that’s the funny thing about it. They can say it’s a PR stunt, they can say whatever. I know I’m going to get my day in the octagon and I’m going to have fun doing it. So, I just try to avoid all the silliness. Some days it does get to me and I don’t ignore it. And then I remember why I ignore it because you fed the trolls. Then I get back on with my life.”

“Duke is dead set on me being with him for 12 months before entertaining the ideas. He’s a responsible coach. If you look at it as, say I was with Duke for a year and they say I’m good to go, and they say I’m going to fight in February, so now what, I’ll fight in March or April? Like, who the fuck is upset about that? It’s the same people who said they didn’t want to see me fight in the first place, so shut the fuck up. Don’t watch it, don’t pay attention to me, don’t follow me on Twitter. I don’t know why they torture themselves. I’m such a heathen in their eyes, then don’t associate with me. Don’t write articles about me, leave me alone. Of course they will (watch him fight). Of course they will, and that’s my whole point.”