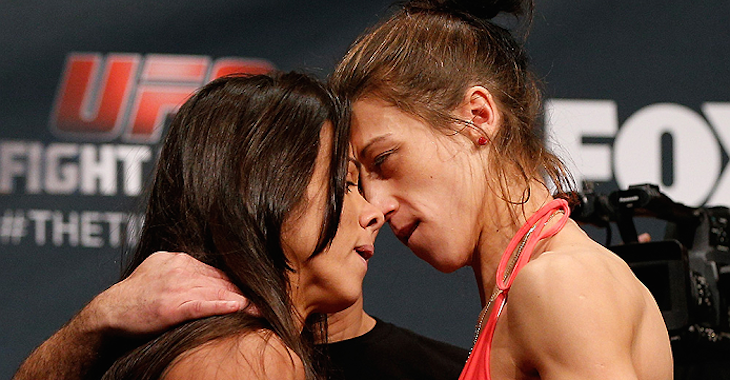 UFC strawweight Claudia Gadelha seems to be the next in line for champion Joanna Jedrzejczyk. The two fought before and the champ earned a decision win in an extremely close fight.

Ever since the fight Gadelha had been pushing for a rematch as she feels that she won the fights scrap and wants a chance to prove it, this time with the UFC title on the line. So far, ‘Joanna Champion’ has looked unstoppable. She ran through the former champ Carla Esparza and more recently put a vicious beating on Jessica Penne.

Gadelha is coming off of an impressive victory of her own, earning a one sided decision over former WSOF strawweight champion Jessica Aguilar.

Unfortunately, the rematch will have to be on hold for a little bit, due to an injury suffered by Gadelha during that Aguilar fight. She told Combate:

“I partially tore a ligament in my middle finger. The doctor gave me three months to be 100% and do anything with that hand. I will spend 20 days with my finger immobilized. I’m already feeling better, I can move it, but I will need three months to punch with this hand again, so I believe the fight could happen in January.”