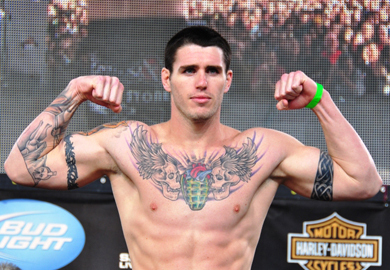 “The reason I told the UFC they should match me up with Luke, is because I was looking at some rankings the other day, and I saw his name in the Top 10, and I just thought that was kind of ridiculous. He hasn’t fought in a while, and I can’t even say that I’ve seen any of his fights. Regardless, when I looked him up, people do have him in the Top 10, so that’s a fight I think I need. I think I belong up there more than he does… The UFC is where the best fighters in the world are, and he needs to come over and prove himself. He can say what he wants, I’m ready to fight any time. I’m not the one pulling out of fights. Who knows when he’ll be ready to fight, but hopefully it’s around the same time I am, around February or March. You know, I do a lot of charities, so I guess we can call this another charity, me trying to help him get in the UFC.

Like I said, I’ve never really watched any of his fights, I think I may have seen a highlight, but I’m a game opponent, and I come to fight hard. I feel like I’ve really hit my stride and I’m training with good guys. I’m ready for those top guys, and if his name is on that list, I’m gonna knock him off. This isn’t just at Luke. I don’t know him personally or dislike the guy, but I’m going after those guys that are ranked, because I need to work my way up. I figure rather than sitting back and waiting to see who the UFC will give me, I’ll just let them know who I want to fight. Joe Silva always says, ‘If you want to fight somebody, let us know, and we’ll try to make it happen.”