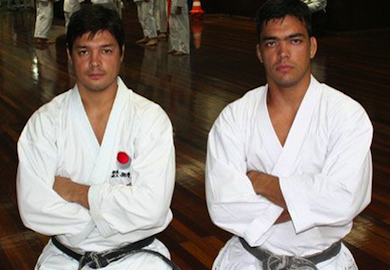 “I broke my hand in the first round of my last fight and fought two more rounds, so my bone shattered. I did one surgery but had to do another with the same hand later. It was a slow recovery, but I’m completely healed now. I’ve started to become a more complete fighter, training more ground game and wrestling. I’ve been training hard for a long time. I did my preparation in Belem, Brazil, but now I’m going to Manchester with Lyoto. After his fight [with Mark Munoz] I’ll finish my preparation in California. I’ve seen [Houghton’s] fights already. He’s a Muay Thai fighter, likes to stand and fight, but I couldn’t see how his ground game is. It’s an MMA fight. Maybe I’ll have the opportunity to take him down, and I don’t see any problems with that — but I want to fight him standing.”

“The UFC is the biggest promotion in the world, that’s where the best fighters are, but I’ll have to show what I can do to get there. It doesn’t matter if I’m Lyoto’s brother, he did his career and I’m doing mine. I’ll have to win fights to get in the UFC, and that’s why I’m training and fighting for.”

Chinzo Machida, Brother of the UFC’s personal ‘Karate Kid’, Lyoto Machida, is hoping that a few wins on the regional circuit will serve its purpose and get him a UFC contract alongside his bro.

After a lengthy layoff due to injury, he hopes his next fight under the RFA banner brings him one step closer to making that goal a reality.