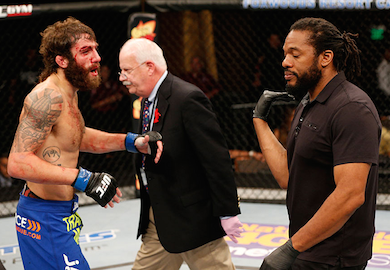 “Dear @joelauzon, If you’re gonna question my integrity as a man publicly, you can put the Xbox controller down, board a plane to Spokane, WA and come try to take the bonus check out of my hands yourself, don’t cross that line. I said I would of given that FOTN money back to FINISH the fight. I did not say I would pay you 50k for a rematch. I bow out of this social media quarrel, no more retweets, DBSH’s, or interviews. I’ve accepted the loss on my own terms. You don’t want to do the dance again so it’s pointless. But if you ever change your mind, I’m your huckleberry, that’s just my game. Sincerely, Doc Chiesa P.S. I still owe you a cheeseburger”

@JoeLauzon Agreed it's squashed. Great fight, I'm still a fan and no love lost. Cheeseburgers on me next time we cross paths.

After a lengthy post-fight back-and-forth, Mike Chiesa and Joe Lauzon settle their differences through a few engaging social media posts.

The two lightweights earned Fight of The Night Honors last Friday Night in Connecticut, but by Chiesa’s account, the bout was stopped short.