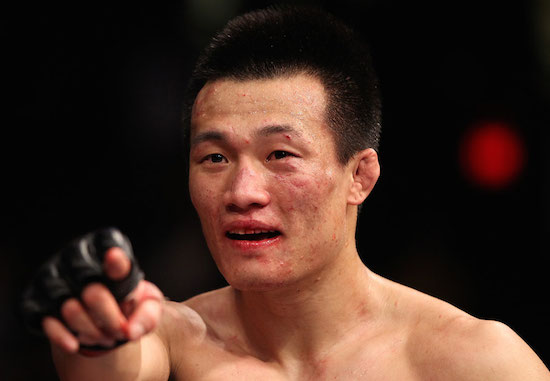 The news that UFC featherweight contender Chan Sung Jung would be out of the octagon for at least two years due to South Korea’s mandatory military enlistment law was a bit of a surprise, unless you’re Chan Sung Jung. He spoke with MMAFighting.com on Monday about the news and his career.

“The Korean Zombie” appears to have a positive outlook and considers the two year service somewhat of a blessing.

“It’s not something that was a surprise. Since all able-bodied men are obligated to serve, I knew that it was something that I’d have to do at some point. It’s the law and a duty of all Korean men. Those are the rules, so I have to abide by them. I’ll be working in my local district office. Because of several surgeries that I had, I was given a government office job. I’m not sure exactly what I’ll be doing there, though. I think this may extend my career, because it gives me some much needed time to heal. I’ll have time to work on my skills without pushing myself to the limit, which is necessary when training for a fight.”