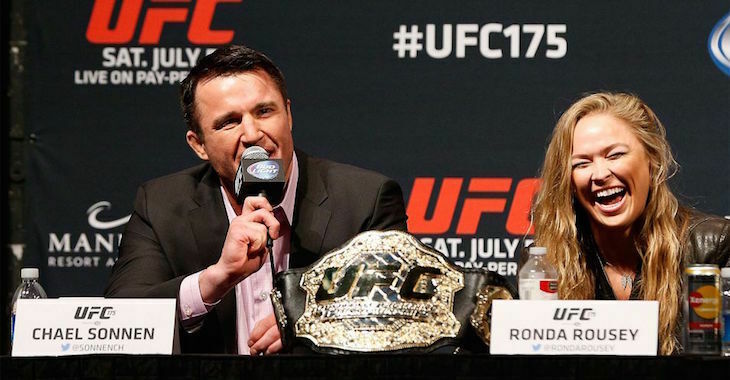 Former UFC middleweight Chael Sonnen has a lot to say about almost everything. The guy can talk.

Recently, Sonnen talked on ‘Stone Cold’ Steve Austin’s podcast and of course weighed in on one of the biggest topics currently in the sport.

The UFC booked Holly Holm to face off with bantamweight champion Ronda Rousey at UFC 195, a fight that was announced to a lot of confusion and frustration. First off, everyone assumed it would be Miesha Tate getting the next shot, second, Holm only has two fights in the UFC and both were decision wins.

Sonnen talked about the booking, saying that it really doesn’t matter who they put in there with Rousey, because the whole division is so far from Rousey’s skills. But, he did say that Rousey’s fighting style is pretty basic, especially when you compare her to someone like Jon Jones who comes in and does all that flashy stuff.

“As far as fighting Ronda goes, these girls have one tremendously big obstacle which is that they don’t have the competitive history [of Rousey]. Ronda’s skill set is not unique. Jon Jones’ skill set is unique. Jon Jones goes out there and does video game moves that the announcers can’t even call because they’ve never seen them before. Ronda’s a very basic and straightforward fighter, however, she’s a masterful competitor.

“She’s been at it her whole life through the Judo circuit, been to two different Olympic games. She’s shaken hands with another girl, competed with the lights on and found a way to get her hand raised.”