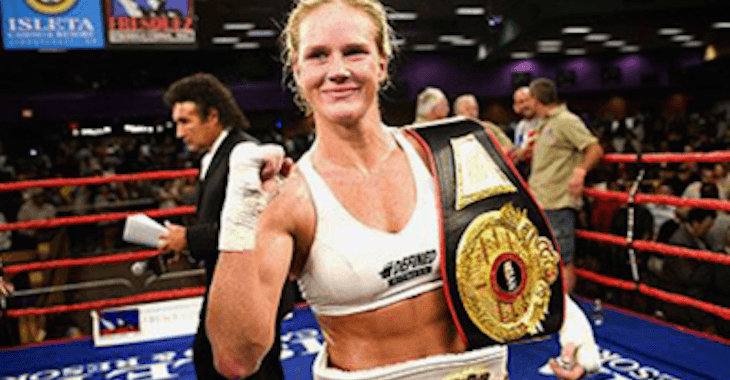 Holm will face off against the champ, Ronda Rousey, at UFC 193 in Melbourne, Australia on Nov. 14. Before the fighter entered into MMA and began her undefeated streak, Holm was a highly decorated boxer, becoming the IBA, WBC, WBF, WBAN, IFBA, WIBA, and NABF welterweight champion of the world before leaving the sport.

Still, Sonnen recently spoke to Submission Radio and went on quite the rant about the validity of those titles.

“Holly is gaining some fan support, and as far as the locker room goes, we can’t get behind her ’cause she’s not telling the truth, that there is no validity that I’m willing to sign off on — and I’m happy for someone to come in and disagree with me, tell me where I’m wrong. But there is no validity to any of her world championships, let alone some ridiculous claim of being a seventeen-time world champion. I mean guys, I can go open the door to my garage right now, invite all comers, and then put a belt around whoever wins and call it the ‘world championship’. And I mean that kind of stuff happens all the time. You see it in arm wrestling. There’s a world championship for some game called ‘cornholing’, which is like some Midwest version of horseshoes. There’s world championships for thumb wrestling, and there’s no validity to this stuff. There’s no validity to her being a seventeen-time world champion, and I don’t believe as an analyst that there’s any validity to any, zero of her championships. I don’t know any tournament she entered where the entire planet was welcome to enter. I’ve been making this claim for a while wanting someone, wanting Holly to disagree with me. I want her coaches to come out and say, ‘Chael, you don’t know what you’re talking about.’ It’s never happened. She’s got the thumb-wrestling world championship from some dude’s garage. That’s just the reality. I do think she’s a skilled fighter, I think she’s a good boxer. I don’t know if that matters. I’m 38 years old, I’ve never met a female boxer. Not one. I’ve traveled the world, I’ve seen damn near every continent in every country, I’ve been in every state in America, I’ve never reached across a table and shaken hands with a woman that turned out she was a boxer. So are you the best boxer in the world for females? Maybe? Does that mean you beat about three people? Yeah, it does.”

What do you guys think about what Sonnen’s saying here, does he have a point, or is it just Chael being Chael?