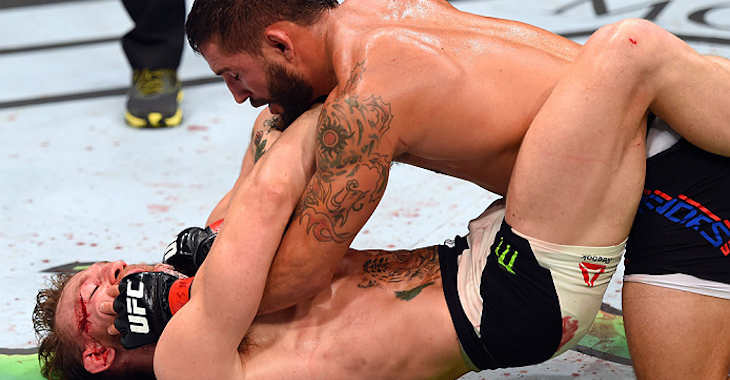 The dust from “UFC 189” is still settling and it’s going to take a while for the MMA world to calm down. The event was one of the best in the history of the sport and was capped off with a fairy tale ending for Conor McGregor.

“I felt like I was doing great the first two rounds,” Mendes said at the UFC 189 post fight presser. “Especially that second one, I was controlling the fight the whole time, but I took a risk. I went for the submission. I probably should have just stayed there and kept throwing the elbows, but I’m trying to finish the fight. That’s the risk you take and that’s the fight game.”

Mendes wasn’t kidding; He was battering McGregor’s face for several minutes with stiff ground and pound shots in the second round. McGregor seemed desperate for the referee to stand the fight up, but Mendes stayed busy and repeatedly blasted him with hammerfists and elbows.

However, Mendes went for a submission which led to a scramble where McGregor made it back to his feet. It wasn’t long before McGregor was picking Mendes apart with shots from the distance to solidify his role as champion in the featherweight division.

“I felt like I had complete control on top,” Mendes stated. “I felt like it wasn’t a whole lot he could do when I was on top of him. I made the mistake of trying to go for the submission. I could have stayed there, I probably should have and just finished the round out like that. It was just a mistake I made and that’s just how it goes.”

Who do you think would win in a rematch? Does McGregor have the skills to grapple with Frankie Edgar? Share your thoughts in the comment section below!