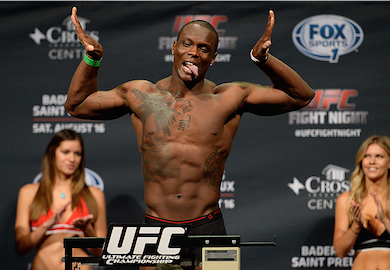 Rafael Cavalcante is officially out of his UFC Fight Night 56 bout against Ovince Saint Preux. The UFC announced that Francimar Barroso would be replacing Cavalcante, who is injured.

No word on the severity of Cavalcante’s injury, or what the injury is.

OSP was climbing the light heavyweight rankings, and was on a tear, going on a 5-fight win streak before losing to Ryan Bader earlier this summer via unanimous decision. The bout was OSP’s first loss inside the UFC.

Barroso on the other hand is 1-1 inside the UFC, most recently dropping a split decision to Hans Stringer at UFC Fight Night Shogun vs. Henderson II back in March.

The lineup for UFC Fight Night 56 is currently as follows: