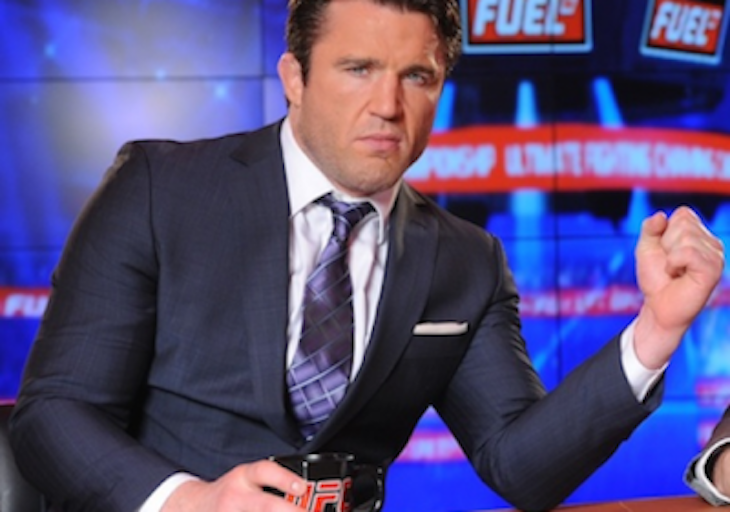 Fan favorite fighter, Chael P. Sonnen, who retired from MMA after failing 2 drug tests and being handed a 2-year suspension, is now opening up about his PED usage, and is calling for a cleaner sport.

He wrote the below piece for a blog entry on The Cauldron on Medium.com.

“I believe in clean sport and I have used performing enhancing drugs. Does that make me a hypocrite? Maybe — but it doesn’t make me wrong.”

Before we begin, let’s get one thing straight: At various times during the course of my career as a professional fighter, I used performance enhancing drugs to gain a competitive advantage in the ring. Period. I make no excuses for my actions, nor do I offer any apologies for the choices I’ve made — some of which were self-destructive, all of which were made of my own free will.

The reality is, though the details of my admitted usage of testosterone, human growth hormone (HGH), anastrozole and erythropoietin (EPO) are largely insignificant when viewed in context, no amount of clarification or justification will ever completely erase the damage I’ve done to my reputation. And maybe that was the price of mixed martial arts admission. Maybe, in trying to slake my unquenchable thirst — for titles, for acceptance, for validation, for fame, for money — I opened Pandora’s box, and all that’s left for me to do now is be honest about my intentions, my motivations and my perspective.

Though I started taking PEDs relatively late in the game — at least compared with some of my peers, who also grew up in the “Steroids Era” — the idea of ingesting substances to help me feel my best was not a foreign one. I actually first took PEDs when I was 12 years old when they were prescribed to me by my family doctor to combat certain developmental problems. I never told anyone I was taking them — mostly because of the stigma and ridicule I knew would come along with it. And I disclose this private medical information now not to solicit your pity or, even worse, your furrowed brow, but because my adolescent experience set in motion the development of my own moral code — which eventually came to shape the decisions I would later make.

At the time, and during intermittent periods over the following two decades, I took hormones (legally) for medicinal reasons. Yes, there were beneficial side effects — no one, least of all me, denies this to be true — but one can make a reasonable argument that all medicines “enhance performance” in some way or another. After all, who would willingly ingest something that would diminish them as a person? Medicine makes us better. Medicine improves us. Typically, medicine affords us the opportunity to perform the way we did before whatever affliction we suffer from manifested itself.

I’d wager a guess that most people haven’t ever looked at the World Anti-Doping Agency’s (WADA) list of banned substances (hint: pretty much everything is banned), but it’s crucial to understand that there is a significant distinction to be made between PEDs as an entire category and some steroids. I have never in my life used steroids; in fact, I have never so much as tasted a drop of alcohol or even held a cigarette.

Anabolic steroids are illegal synthetic variants of male testosterone which increase cell protein — usually in muscles. Risks associated with their use include severe changes in cholesterol levels, acne, high blood pressure and liver damage (mainly with oral steroids). Some studies have even linked steroids with dangerous changes in the structure of the heart itself, not to mention the well-documented cases of devastating and irreversible changes to users’ mental states.

The PEDs I used, under the care and guidance of my physician(s), were 100 percent legal with appropriate prescriptions. Not that it makes my taking them any less wrong, of course — because my usage was prohibited by the governing bodies of my sport — but inasmuch as my intentions at the time are concerned, these facts are relevant.

For example, when I came down with a kidney problem a few years ago, I was floored when the doctor handed me a prescription for EPO. Did he not realize what he had given me? EPO, as I understood then (and later confirmed by using it), was sports training’s holy grail. I had heard about what it could do for athletes, but believe me when I tell you, if you are going up against someone who’s been taking it when you haven’t … you are going to lose, and lose badly. I knew immediately how valuable that prescription was, so I buried it in the back of my underwear drawer — to be used many months later when it would benefit me in the ring.

Again, I was responsible for my actions, and I was wrong. Had I merely sought a usage exemption from the appropriate fighting commission on account of my legitimate anemic condition, the line between PED and medicine likely would have been blurred — even though the benefit would have been exactly the same.

Though it may seem simplistic and transparent now, my internal governing code was premised upon two lines in the sand which I refused to cross: 1) no steroids; and 2) no illegal drugs.

We tend to lump all PEDs together, but nothing could be further from the truth. There is virtually limitless medical research that demonstrates the clear benefits of (responsibly) using certain performance-enhancing drugs, and despite my suspension, and retirement from competitive fighting that followed, I would not hesitate to use PEDs again if a trained and reputable physician advised me to do so.

Truth is, I have absolutely no regrets over taking testosterone. When used in a responsible fashion, the drug can work wonders. I experienced transformative effects to my overall attitude, my energy level, my appearance (skin and hair), and, obviously, my confidence. None of this is meant to suggest that everyone can or should take testosterone — when abused, it can have devastating effects — but for me, the benefits far outweighed the risks, especially because of that certain built-in check that fighters must be mindful of: the weigh-in. You see, “abusing” testosterone (or any other PEDs I took) never made much sense for me. I would not have made weight had I done so.

Now, I know what you’re thinking: “Chael, you still don’t seem to understand that what you did was wrong. Don’t you see how by taking the easy path — the cheaters’ path — you short-changed the guys you fought against?”

I knew full well that breaking the rules was wrong then and remains wrong now; that my conduct and intentions were colored by an overriding sense of selfishness and entitlement; that the warriors I fought against were probably* not relying upon the PED-infused fortitude that often carried me to victory.

(*I say “probably” because I have no idea what anyone else in UFC did or does with their own bodies. If you ask me to put a percentage on how many fighters are using PEDs, I’d put it at somewhere close to 100 percent. This doesn’t mean, specifically, that they are using legal (but not exempted) PEDs or illegal anabolic steroids, per se; it just means that it is nigh-impossible not to run afoul of WADA’s archaic (and wackadoo) banned substances list unless you’re restricting your diet to bread and water — and even then, you really can’t be completely sure. Again, I made my own bed, and I will lie in it. I didn’t take PEDs because I felt it necessary to keep up with the competition; I took PEDs because I wanted to be the best me.)

Where you’re wrong, however, is when it comes to any of this being “easy.” What most people — even casual MMA fans — don’t realize is that the training that goes into being a championship fighter is far more punishing, brutal and demanding than any one match could ever be. To be the best — actually, to even obtain a shot at facing the best — you have to be willing to put in countless hours, days, weeks and years of training. It’s monotonous and it’s depressing, and at times, it’s downright demoralizing.

Now, consider adding another layer of “training” on top of the weights, the running, the practice sessions, and the video work.

Fans see the chiseled bodies and the superhuman feats of strength and the boundless athleticism, but those are merely the end results. There is nothing “easy” about starting and maintaining a regimen of PEDs. Though I didn’t know it before I got involved, PEDs are a tremendous nuisance to those who take them — requiring excessive time, expense, doctor visits, and a never-ending series of blood tests and ingestion tweaks to keep up with ever-changing protocols. In essence, the PEDs become their own distinct part of the training process, every bit as important as eating right, lifting weights, getting enough sleep and preparing mentally for what’s to come.

All of which brings us to the hypocritical elephant in the room: How, exactly, can Chael Sonnen, admitted PED user, claim to be in favor of clean sport?

Where I erred was not in the taking of performance enhancing drugs, it was in the manner and under what pretenses through which I did so. In a vacuum, not only can taking testosterone, HGH and EPO be warranted, they can provide virtually unparalled health benefits that have nothing to do with being bigger, stronger or faster. In my case, the former even helped with fertility when my wife and I struggled with conceiving a child.

But in the end, rules are rules, and I broke them. Repeatedly. It matters not that my intentions were muddled by some amalgam of ego, desire, insecurity and at least some belief that what I was doing wasn’t wrong, per se. I cost myself a chance to be the best I could be — not on the mat, necessarily, but in representing myself as an inspiration and role model to young MMA fans, and the millions of people who supported me throughout my career.

So, yes — I do firmly believe that every athlete should adhere to the (sometimes unfair and often duplicitous) rules that their sport’s governing bodies have enacted. But if you think that for every truly “clean” player out there, there aren’t three others looking for any and all ways to get an edge — “legal” or not — you’re kidding yourself.