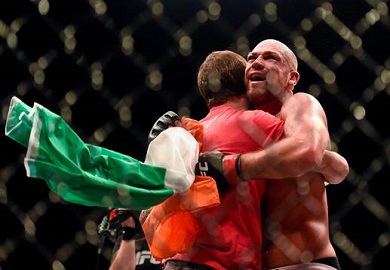 All hope seemed lost for Cathal Pendred this past Saturday at UFC Fight Night Dublin after a round that many fight fans scored as a 10-8 round against Pendred. Veteran referee Marc Goddard could have understandably stopped the fight at multiple points throughout the first round, however every time he told Pendred to defend himself or the fight would be stopped, Pendred answered the call by defending himself and defending against multiple tight submission attempts while rocked.

In the second Pendred came out a little more cautious and landed a takedown that ultimately led to a rear-naked choke victory for the Irishman.

In the post fight press conference Cathal took a moment to thank referee Marc Goddard for not prematurely stopping the fight.

“I was worried about it at one stage, but thankfully, you have one of the best referees – if not the best referee in the world – in there with me, Marc Goddard,” Pendred said. “He knew I was still in the fight. He could see I was still trying to defend myself and I was still trying to fight back. I’m very grateful that Marc Goddard gave me the opportunity to do that. It allowed me to be the ‘Fight of the Night.’ I changed my live tonight, getting that $50,000 (bonus check).”

“It was one of the greatest comebacks (in UFC history),” White said after the event. “I scored that first round 10-8, too. And I also think that fight could have been stopped in the first round.”