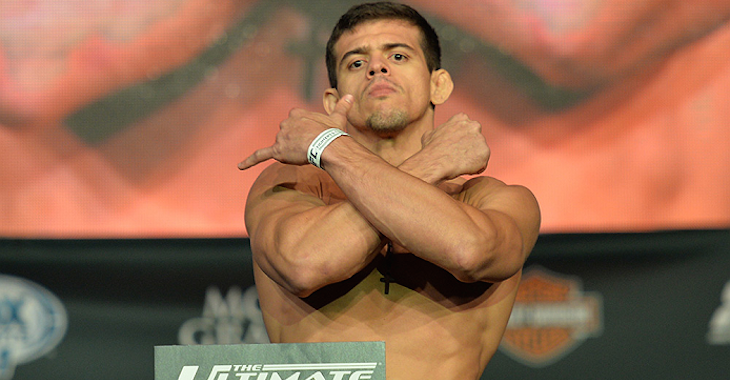 During the NSAC’s meeting on Thursday UFC fighter Caio Magalhaes appeared in front of the commission for spitting blood on Josh Samman after Samman scored a 1st round submission victory.

Referee ‘Big’ John McCarthy recounted the incident to the commission:

“Josh Samman told me, still inside the locker room, that he was concerned because Caio sometimes does things he considers dirty. I told him to relax because I was in charge…

“As soon as the fight was over, I separated them. You can see I separated Caio from Josh to make sure he was okay. Josh came over and reached his hand and Caio reached his back, but ended up turning, spitting and blowing his nose on Josh at the same time. Most of the blood actually hit me, which was not a problem. I have very bad Portuguese, but I told him that it was not good. Samman’s corner got very angry so I ended up talking to Bob Bennett, NAC’s director, at the end of the night.”

Magalhaes offered little in the way of excuses for his actions, and apologized for his absurd behavior.

“I was very tired, defeated and frustrated and I behaved absurdly. I didn’t think, but I realized what I did right then. My opponent accepted my apologies still inside the Octagon. I don’t want to justify it, I just want to apologize. Today, I’d like to apologize to everyone else, especially to referee ‘Big John’, who is someone I really respect in this sport. I would also like to apologize to the Commission and my UFC partners. I never intended to disrespect the sport as a man or as an athlete. I fight since 2009 and have been in the UFC since 2012, and I never had any problem like this before.”

The commission ultimately handed Magalhaes a 6-month suspension and ordered him to perform 40 hours of community service.

The suspension began back in July, meaning Magalhaes will be eligible to fight in January.