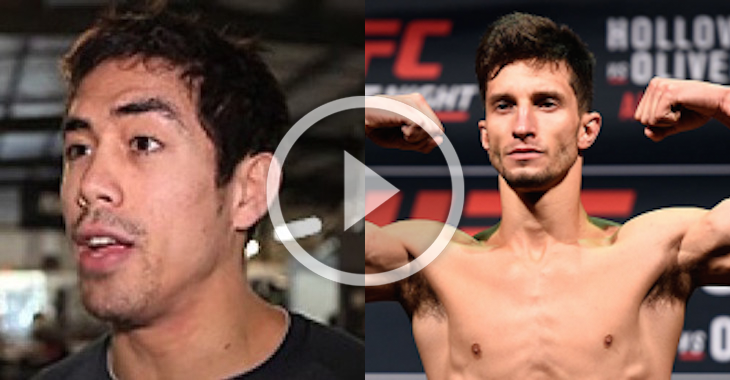 When UFC lightweight Frankie Perez knocked out Sam Stout in the first round at UFC Fight Night: Saskatoon and secured his first win in the octagon, and then announced his retirement, plenty of people were shocked and a few were annoyed.

Michael Bisping got a little heat when he made comments about Perez not being man enough to keep fighting. On opposite sides of the debate, Dominick Cruz mentioned that sometimes it takes real courage to know when to walk away.

So, needless to say, people were divided on the subject.

Then there was Justin Buchholz’s reaction. The Team Alpha Male fighter and host of Stud Show Radio, went off on Tuesday’s episode, blasting the young fighter for the way he went about the decision.

Check it out, then watch the full clip above:

“We were watching the UFC this weekend and this guy knocks out Sam Stout. I think it was his first fight in the UFC, or maybe it was his second. First win?”

“Anyways, this guy comes in, fights Sam Stout, knocks Stout out in round one –- than he retires.

“He said I don’t want to put myself at risk, I don’t want to put my family at risk, so I’m going to retire and step away from the sport. And I saw articles online, saying like, oh this guy goes out on top and I’m like, first of all how the f*ck are you calling one UFC fight a career? You didn’t retire, what are you talking about?”

“What’s your point, you go out there and you fight a f*cking warrior like Sam Stout, who’s put on some of the best fights, been in the sport for a long time, like one of the guys who has like a real fighting lineages from a real team, a guy that f*cking did some sh*t in the sport. You knock him out, cause he’s on the tail end of his career, he’s a little older and been through a lot of damage, and you knock him out and than retire? Like maybe Stout was about to retire, you f*cking d*ck.

“So basically when he said, ‘I don’t want to put myself at risk’, I was like OK so you’re a pu*sy, fighting’s not for you, go home.”

“I think it’s bullsh*t that he did that.”