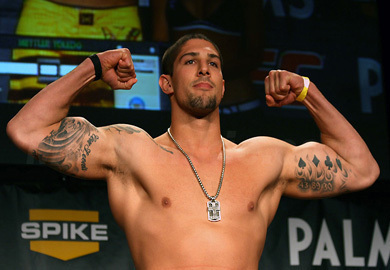 “I don’t know if a lot of people know this. Me and Matt were on season 10 (TUF) together, which was ages ago. Me and Matt probably talk once every two weeks, at least. Since the finale of the show to now. You’re talking almost five years ago. Me and Matt are very close friends. I get a call from him around midnight, my time in L.A. which is whatever, like 3:00 A.M. his time in Florida. And I get like 10 missed calls. I’m like, ‘What the hell does Matt want?’ Matt’s a goofy guy, so I don’t know, I thought maybe he drunk dialed. I keep hitting ignore, I got to bed and I wake up next morning and I call and I’m like, ‘What man, what do you want, dog?’ He’s like, ‘Bro, really? We have to fight each other?’ That’s how I found out. He’s like, ‘Yeah man, Joe Silva just called my manager and we have to fight each other.’ He’s coming off his controversial suspension where he got fined, so, he’s in no position to say no. Listen, it is a business, this is entertainment. I love Matt, he knows this. I wish I could fight any other heavyweight, but, you just can’t. One thing I can guarantee you is that Matt and I will put on a show. And I told him, ‘Look, I’m going to sign the contract and we can still text and whatever you want to do, but, once I step into the Octagon, it’s on. I’m not your friend in here.’ He realizes it’s a business and I have some business which is to get to that title shot by the end of 2013 or start of 2014. You can put my mom in gloves right now and if they call me, I would have to fight her. That’s how bad I want it. So, whether it’s Matt, whether it’s my brother or whether it’s my mom, it’s going down.”