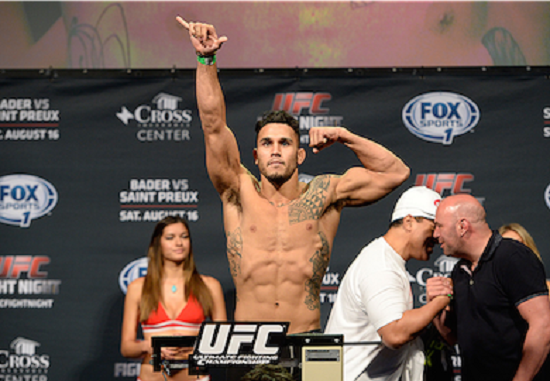 The UFC has been extremely busy this week booking matchups for upcoming events. Catch up on all of the latest matches that have been set over the course of this past week!

First up we have Nate Marquardt vs. Brad Tavares, who will face off at UFC 182 in Las Vegas on January 3rd. Marquardt is coming off a quick submission win against James Te Huna back in June, whereas Tavares is currently on a two fight skid that saw him lose to Yoel Romero, and most recently Tim Boetsch.

Next up we have Louis Gaudinot vs. Kyoji Horiguchi, who will also collide on January 3rd at UFC 182. Gaudinot, who was set to return from a suspension earlier this month, was forced out of a bout against Paddy Holohan. Prior to his 6-month suspension, Gaudinot defeated Phil Harris, which was ultimately overturned to a no contest after Guadinot tested positive for banned substances. His opponent, Kyoji Horiguchi, is undefeated in the UFC (3-0), and will be riding an 8-fight win streak into the bout.

Next up we have Claudia Gadelha vs. Joanna Jedrzejczyk, who are set to do battle at UFC on FOX 13 in Phoenix on December 13th. Gadelha, who is undefeated in her pro career, is coming off a win over Tina Lahdemaki in her UFC debut back in July. Her opponent, Joanna Jedrzejczyk, is also undefeated in her professional career, and is also coming off a win in her UFC debut back in July.

Next up we have Tim Means vs. Marcio Alexandre Jr. who will square off at UFC Fight Night 58 in Brazil on December 20th. Means snapped a two-fight losing streak in July with a unanimous decision win over Hernani Perpetuo. His opponent, Marcio Alexandre Jr., is coming off the first loss of his professional career to Warlley Alves, which came in the finale of TUF Brazil 3.

Next up we have the return of Erick Silva, who will face Mike Rhodes at UFC Fight Night 58 in Brazil on December 20th as well. Silva hasn’t been in the Octagon since a brutal beating at the hands of Matt Brown forced him to be stretchered out of the Octagon back in May. His opponent, Mike Rhodes will be riding a two-fight losing streak into the bout that likely puts him in a ‘win or be cut’ situation when he faces Silva in December.

Next up we have another ‘return’ matchup, where Walt Harris will step into the Octagon to face Soa ‘The Hulk’ Palelei at UFC Fight Night Sydney on November 8th. Harris will be making his return to the UFC after being cut back in January, but saw him bounce back by winning his next bout under the Titan FC banner. His opponent, Soa Palelei had an 11-fight win streak snapped in June by Jared Rosholt.

Next we have Ildemar Alcantara vs. Richardson Moreira, who will square off at UFC 183 on January 31st in Las Vegas. Alcantara is coming off a unanimous decision to Kenny Robertson at UFC 175 in July. His opponent, Richardson Moreira lost his UFC debut earlier this year when he was KO’d by Marcos Rogerio De Lima.

Next up we have Henry Cejudo vs. Dustin Kimura, who will square off on December 13th at UFC on FOX 13. Cejudo will be making his UFC debut, and bantamweight debut at the event after being unable to make the flyweight limit of 125 pounds at UFC 177 earlier this summer against Scott Jorgensen. His opponent, Dustin Kimura is coming off a unanimous decision win against George Roop at the TUF Nations finale back in April.

Last but certainly not least, we have UFC women’s bantamweight champion Ronda Rousey, who will square off against Cat Zingano at UFC 182 on January 3rd as the co-main event behind the long anticipated matchup between Jon Jones and Daniel Cormier.