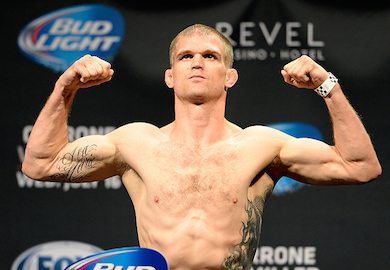 Five new UFC bouts have been added to upcoming UFC events, some of which fight fans will find very intriguing.

At the top of the billing, Evan Dunham (pictured) will return to action against Rodrigo Damm. The two lightweight fighters have agreed to face off at UFC 182 in January.

A bout previously booked between Erik Perez and Marcus Brimage has been cancelled following an injury to Perez. In his place comes Jumabieke Tuerxun. The two will fight next month, in Australia.

The UFC on FOX 13 card for Dec. 13 just got an additional preliminary booking, in the form of David Michaud vs. Garett Whitely. The two will meet in a lightweight contest on the night’s prelims card.

In Brazil, UFC Fight Night 58 just got deeper with the addition of a bantamweight bout between Leandro Issa and Yuta Sasaki.