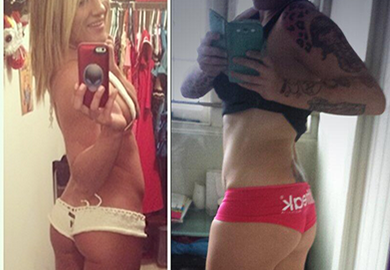 Mark Bocek thinks girls who posts bikini shot selfies have a better chance of making it to the big stage.

Check it: (Via mmafighting.com)

“The direction of MMA is they’re pushing the female-MMA – Ronda (Rousey) technically the pound-for-pound best fighter. We’ll put experienced, accomplished male MMA fighters on undercards but we’ll put females who started training last year in the co-main event. That direction was part of the persuasion that forced me to get out.”

“It is difficult for an elite female MMA fighter to get in (the UFC), but if she has some decent skills and some cool bikini shots then she can get in.”

In the photo above we have two females, Felice Herrig and Bec Hyatt, who are now both signed to the UFC.