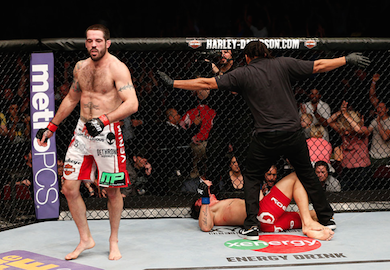 Last weekend fight fans saw just why Matt Brown’s nickname is Immortal. The Ohio native stepped into the cage in the main event of UFC Fight Night 40 opposite Erick Silva. After a kick to the body dropped Brown in the first, he fought his way back to secure a third round KO over Silva. In the co-main event we saw Costas Philippou defeat Lorenz Larkin via KO in the first.

Below are our updated BJPENN.com rankings following the event. As always, head on over to the rankings section of our site for a complete top 10 ladder for each weight class.

Costas Philippou cracked the top 10 in the middleweight division and landed at #10.
– As a result, Gegard Mousasi was bumped from the top 10.

Honorable mention: Soa Palelei, who defeated Ruan Potts via KO and is one win away from cracking our top 10.