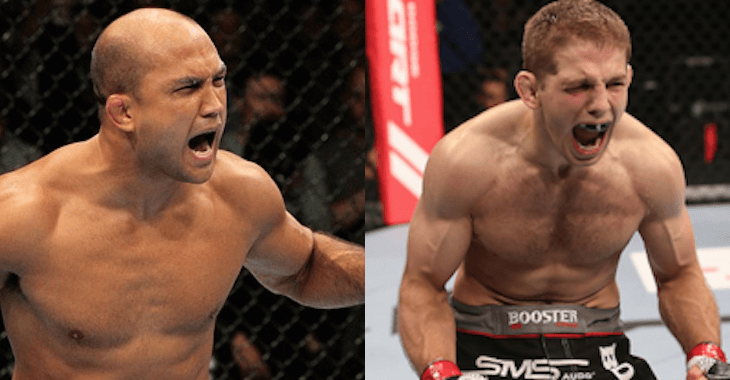 UFC Hall of Famer and former two-division champion BJ ‘The Prodigy’ Penn just appeared on Wednesday night’s episode of ‘UFC Tonight’ and announced that he wants to return to the UFC and fight Nik Lentz at featherweight.

Penn explained his reasoning, saying that he’s sick of hearing about Mike Dolce and wants to fight Lentz, who works with Dolce.

“You know what, I’m sick and tired of hearing about Mike Dolce. You know what Mike Dolce, I’ll put a challenge out right now. You go grab Nik Lentz, that’s your boy, bring him down to 145, I’ll run through him in one round, then I’ll find you in the back and I’ll smash you. Ok, let’s do that, let’s do that right now, I’m ready.”

“Mike Dolce wants to say all this stuff, I don’t train, I don’t do this and that, let’s do this, bring him down to 145. I would, I would come out [of retirement] for that.”

Penn elaborated on the situation with Dolce.

Penn said Lentz is the guy he wants to fight and right now that’s the fight he’s focused on getting. Penn admits he hasn’t been in the gym for a while, but is so tired of hearing all this stuff about Dolce, so he’s ready to jump back into training to take on Lentz.

“I’d come out for the grudge match you know, we’ll see what happens after that.”

Penn last fought at the TUF 19 Finale, back in July, 2014 and after that decided to retire from the sport. On UFC Tonight he said he’s been busy doing other stuff, like farming taro, but said once he puts his mind to something it’s all or nothing and right now he’s got his mind on fighting Lentz.