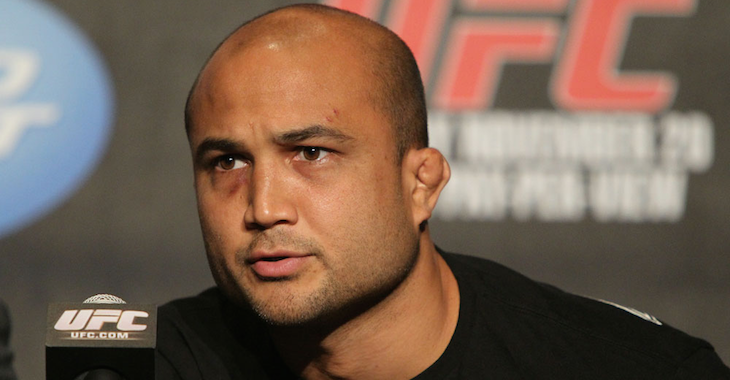 Weight classes within the UFC could be seeing some major facelifts across the board now that the weight-cut process has changed. In June, USADA informed fighters that they will no longer be able to rehydrate using IV bags after weigh ins. The fighters have been given a grace period of October 1st to adapt to the new rules.

While several of the fighters within the UFC were enraged at the new rule, there are a select few that have come out in support of the IV ban. Two-division champion and 2015 UFC Hall of Famer BJ Penn is in full support of the new rule and stated he has never used an IV bag to rehydrate after his weigh-ins.

I love the new PED and IV ban in the UFC. I never took an IV in my life after a weigh-in. IVs are for wimps! #BeerAndHotDogs

It's the biggest joke ever. If you aren't sticking needles in your arm to fight the guy gets a 15 pound advantage. #FightLikeAMan

I love the new PED and IV ban in the UFC. I never took an IV in my life after a weigh-in. IVs are for wimps! It’s the…

Do you agree with BJ Penn? Is the IV-bag ban good for the future of the sport? Share your thoughts in the comment section below!