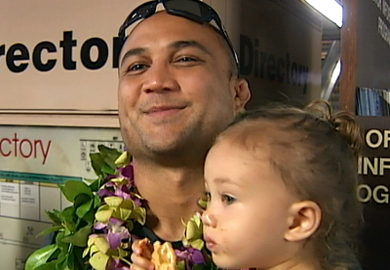 Over the years, BJ has taken the time out of his busy schedule to visit our soldiers and thank them for serving our country. He visited Hickam AFB, Kaneohe Marine Corps, Schofield Barracks, Naval Base in Hawaii, Camp Pendleton, Marines at Miramar, Naval Base in Coronado, Nellis AFB who selected BJ to fly with the Thunderbirds. He did a meet and greet with over 200 wounded warriors in Hawaii. He also visited Kuwait and Afghanistan doing a meet and greet for the UFC. He visited the Navy Seal Team in Norfolk, VA, and the Special Forces Group in the United States Army, and on February 1st, BJ Penn is heading to Washington, DC.

BJ Penn has been invited to attend the SuperBowl Party honoring our wounded warriors on February 3, 2013. The Superbowl Party will be held at the new USO Metropolitan Washington. “I’m truly honored and overwhelmed to be invited to be a part of this great event honoring our wounded warriors. These warriors fight for our freedom, and I have always taken the time to thank them for serving our country”, said BJ. While in DC, BJ will be visiting the Walter Reed National Military Medical Center-physical therapy, do a meet and greet with military at Fort Meade USO Center, and tour the Pentagon and the White House. The Vice Chairman, Admiral and Mrs. James Winnefeld will host a dinner in honor of BJ Penn. Admiral Winnefeld is the Vice Chairman of the Joint Chiefs of Staff, and the Nation’s second highest ranking military officer. BJ wants to personally thank Wes Tavares, Enlisted Aide LCPO to the Vice Chairman of the Joint Chiefs of Staff for coordinating our visit to DC.