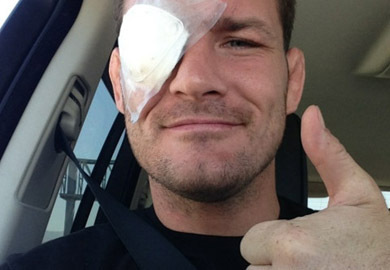 Michael Bisping has been absent from fighting since taking out Alan Belcher in April of last year.

‘The Count’ has since been linked to several important middleweight match ups, but has been unable to get clearance from doctors to resume training and fight again.

We heard last week that Bisping would be getting an exam to see if the damaged eye would allow him to resume training. Unfortunately though, the medical facility in the UK he went to didn’t have the proper equipment and therefore could not clear him to fight.

Bisping suffered a detached retina while preparing for his fight with Mark Munoz. Ultimately, he had to withdraw from the fight in order to repair the eye.

Now, after successfully re-attaching his retina, Bisping has grown a cataract in the same eye.

Bisping will now stay in the UK until the facility gets in the proper equipment and can give the fighter a passing grade.