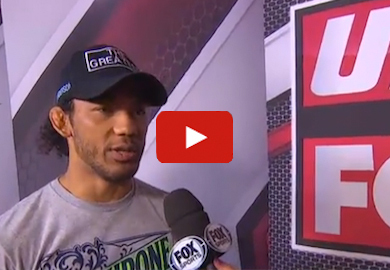 Former UFC lightweight champion, Ben ‘Smooth’ Henderson is ready for another shot at the belt, but in the interim he’s ready to take on all-comers.

Benson Henderson on if he felt pressure taking a fight with a fighter ranked lower than him: “I never felt it.  I understood it was a low reward, high risk fight, with him ranked lower than I am. But that’s who I am, I’m a fighter. I fight. If someone says they want to fight me, I have no problem with that.”

Henderson on if he was happy getting his first finish in the UFC: “A finish is a finish. I don’t care about the finishes. It’s cool to get the submission, but I’m after good performances. That wasn’t too bad a performance.”

Henderson on who he wants to fight next: “I want to stay busy. I’m a fighter. That’s what I do. All those guys who would fight for the belt, send them to me instead. I’ll take them on.”