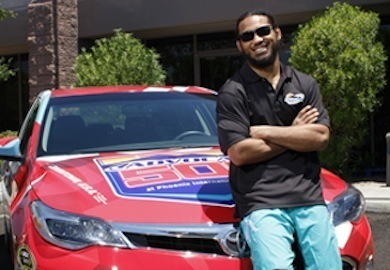 Anderson “The Spider” Silva (33-5 MMA, 16-1 UFC) is the most dominant champion in the history of the UFC,  having successfully defended his middleweight belt ten consecutive times during his title reign.

Current UFC lightweight champion Benson “Smooth” Henderson (19-2 MMA, 7-0 UFC) is confident that he will eventually break Anderson’s record, and has already determined when that might happen:

“I’m going to break it in 2016,” stated Henderson within the locker room of Glendale’s MMA Lab. “I should be able to break it by 2015, but because I’m getting married I’m going to take some time off for my honeymoon. That’s going to set me back by about three to four months. But I have it down exactly. I know when I’m going to break it. It’s going to be early 2016. I know what number I need to get. I know the amount of hard work it’s going to take for me to get there. I know how much I’ve got to get beat up, I know how much I’ve got to practice. I’m aware of it. I know it. Now my goal is to go out there and go do it.”

Henderson defeated Frankie Edgar at UFC 144 in February 2012 to earn the UFC lightweight championship. Since then, he has defended his title 3 times, scoring wins over Frankie Edgar, Nate Diaz and Gilbert Melendez respectively.

Do you think “Smooth” has what it takes to defend his belt another 8 times and surpass Anderson Silva’s record to become the greatest UFC champion ever? Let’s hear it Penn Nation?