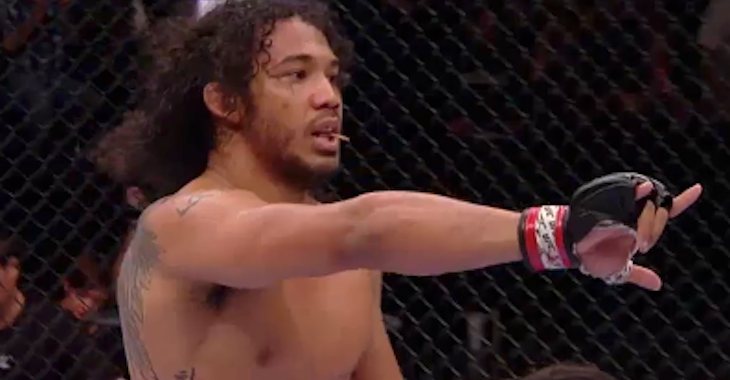 One of the strangest, and arguably most dangerous practices in all of MMA comes from the one and only, ‘Smooth’ Benson Henderson.

The former lightweight champion admittedly has a bad habit of carrying a toothpick in his mouth at all times, including training sessions, and even in his fights.

The toothpick was first spotted after his title defense over Nate Diaz, and was most recently on display after his 4th round submission win over Brandon Thatch.

Henderson finally explains why he keeps the toothpick tucked in a corner of his mouth, in an interview with MMAFighting:

“It’s as dangerous for me to have a toothpick in your mouth as it is to have a 200-pound man punch me in the face hard, or try to kick me in the face. I’m more worried about that, to be honest.”

Henderson went on to reveal that one time he even swallowed the toothpick during a prank played on his mother, but was ultimately okay.

“I don’t have any superstitions. I won world titles with a toothpick, I defended it without a toothpick, it all depends. Sometimes I do it, sometimes I don’t. It’s a bad habit, I know I shouldn’t do it, but it’s fine.”

“I do it every day in practice. I’ve done it most of my fights.”