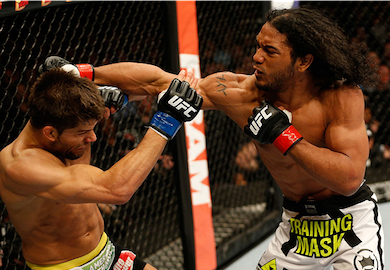 However, even with an 8-1 record, “Smooth” can’t seem to escape criticism from fans for his lack of finishes inside the octagon. All of Henderson’s 8 wins under the Zuffa banner have come by way of decision, 3 of which have come  in the form of controversial split-decisions.

Even UFC president Dana White has been critical of the former UFC lightweight champions “Fight Style,” calling him “a grinder, who grinds out decisions.”

While Benson has been silent about the criticism he’s received from fans and media, his head trainer, John Crouch, shed light on the issue while appearing as a recent guest on “The MMA Hour”:

“I’m not shocked (by backlash). Dana doesn’t like us too much and Benson has never got the chance to sit at the cool kids’ table. And it’s unfortunate because he’s a great dude. He works super hard, not that other people don’t. He’s nothing but a great humble guy and he works his butt off. I’m not surprised by the backlash but I am disappointed by it, certainly.”

UFC President Dana White stated that Henderson’s victory over Thomson wasn’t good enough to earn him another shot at rating lightweight champ Anthony Pettis and that the scores were way off, but John Crouch thinks that the Zuffa fight boss just doesn’t like Bendo’s fight style:

“I don’t know if he (Dana) doesn’t like Ben, but he is certainly not a fan of the way Ben wins his fights. I mean, he’s said it a few times, hasn’t he? ‘He’s a grinder. That’s a Ben Henderson style of fight, winning close decisions.’ He’s said that. You know, everyone would love to have finishes, that would be great. If someone can show me how to make his left hand explode people’s heads when he threw it, that would be awesome. We work on his power all the time. We work on finishing all the time. The guys at 155, I mean who has finished Josh Thomson? Has anybody? I don’t think they have. He’s had, what, 2000 minutes in the ring with Gilbert Melendez? And by the end of it, it was a draw. They’re both great fighters and their last two fights were really controversial as to who won. We’re fighting great fighters and at 155 and below, the finishes are hard to get because people are in such good shape, the are really dynamic and really well-trained. They are good athletes. It would be great to say, ‘Hey, we’re going to finish everybody.’ But the reality of the situation is that it just doesn’t happen.”

“Think about that. In 2004 (the last time Thomson was finished in a fight against Yves Edwards), Ben wasn’t even fighting. He was still in college. Josh has been around, he’s a great fighter, man. I don’t understand why people think it would be so easy to smash Josh Thomson. The guy has been in the top 10 for longer than Ben has been fighting. So, what do you want us to do? It gets a little frustrating. Benson doesn’t care. He’s just going to go out and do his best, none of this matters to him. It just gets under my skin a little bit. We’re trying, we try to do our best. I think Georges St-Pierre said that people were crying that he wasn’t able to finish people. And he’s like, ‘Hey man, these are the gifts that I bring to the table and I’m doing the best I can.’ It ran a note with me because all of the guys in the UFC are trying to do that. Every single one. When you play in the NFL, you don’t always win 70 to nothing. Some games you win in overtime when the other guy fumbles the snap or you kick the field goal that bounces off the upright. Sometimes you win those games. You got to take those games as well as the big ones. So, it’s frustrating to hear him get that criticism.”

What do you think Penn Nation, is the criticism Benson Henderson has been receiving justified?