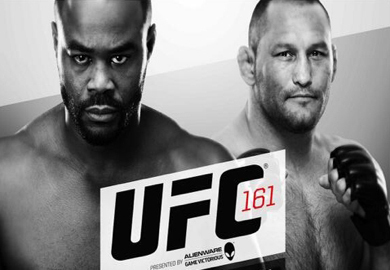 Sorry to get your hopes up. No, this is not a post full of videos of drunkards replicating their favorite UFC 161 moments in various bars.

As an avid mixed martial arts fan, whenever I watch a pay-per-view it’s important to me that I’m in an environment that embraces the sport as much as I do. Some of the best times I’ve had watching fights is at a local sports bar, debating with a complete stranger about how Fighter X is going to beat Fighter Y in dominant fashion. Of course, ordering the pay-per-view at your house and inviting your friends over is a fun way to kill the evening, but nothing replicates the sports bar experience; it’s an experience of its own.

‘Bar Fights’ is a column I’ve wanted featured on this website for quite some time. It’s a column that will analyze every important aspect of watching the fights at a sports bar. How were the wings? Was it expensive? Was there a cover charge? Are the TVs big? Can you hear the fights? How many tight bedazzled fire-dragon shirts were the “bros” wearing? Anything that I take into consideration in having a good time watching the PPV at a bar will be addressed in this column.

Without further ado, join me as I review my experience of watching UFC 161 at Champps Americana Restaurant.

About Champps: Why are there two “P”s? I have absolutely no clue. What I do know is that there are fifty-two different Champps Americana Restaurants spread across the USA, and most of them are on the east coast. The first one opened its doors in 1984 and since then, they expanded their business to what it is today. While it is not as well known as TGI Fridays or Buffalo Wild Wings, they are a brand name and they certainly present themselves as such.
—————————-
Cover Charge: The Champps in Edison, NJ can house up to 450 people. If even half of those customers came into the restaurant to watch the PPV, that means Zuffa would be missing out on $13,500 dollars ( people X $60 per PPV). In order to make up for this massive potential loss, companies who produce PPVs such as wrestling, boxing or MMA, charge the sports bar $1000 to $5000 dollars to air the PPV in their building. Certain factors fluctuate that price, but the biggest factor is maximum occupancy. Now that THEY have to pay money just to air the PPV, the restaurant has to make up for that money. Some companies charge a cover fee, some don’t. It just so happens that Champps does, in fact, charge a $5 fee to watch the PPV. It’s not a big deal, but if companies like Buffalo Wild Wings and Applebees don’t charge me to watch it, what’s stopping me from going there instead?
—————————-
Difficulty of Finding a Seat: I waltzed in with a group of ten people at around 9:45 PM EST. Normally, that’s cutting it close. However, we easily found a table that held all of us and we had a good view of everything that was happening around us.
—————————-
View of PPV: Everywhere I looked, UFC was on the TV. There were a couple televisions with baseball and hockey on, but by the time the main-card started all of that disappeared. We were sat right next to two flat screen TVs and two projectors. The flat screen TVs were around 55″ big which should be a decent picture, but the color and brightness settings were so out of whack that some fighter’s skin colors looked way off. You could tell it was set up by some goofball who thinks “brightness and color is good, turn them way up”. The projectors suffered from the same issue, except they weren’t focused 100%; the picture was a bit blurry. As the night went on, though, I ignored those factors. The volume was turned up once the event started, but not loud enough. The chatter of customers drowned out the event.
—————————-
Food Quality: Champps’ menu is essentially the same as any other sports bar. Everywhere has their own signature burgers, they all call mozzarella sticks different names, but it’s pretty much the same in the end. Long story short, if you like burgers and steak then you’re in luck. Looking for quality wings or sides like fried pickles and sweet potato fries? Go to the next restaurant. Luckily, I’m a burger and steak guy. I ordered a Pepperjack Bacon Stack Burger, Loaded Chips, 12oz. sirloin steak, mozzarella sticks, potato skins and onion rings. Every single drop of food I had was amazing. As I’m writing this, I have the urge to go and throw my leftovers in the oven.
—————————-
Drink Quality and Prices: I ordered one $3.00 Miller Lite and that was it. The beer they presented was filled nowhere near the top; I’ve gone to bars that spill the beer on the table as they place it in front of me and it’s still filled to the brim. Cheating customers out of LITE BEER? That’s just cheap.
—————————-
Food Prices: The prices were one of my downsides of my experience at Champps. I don’t believe there was a single appetizer that’s made for a grown man that was under the price of $10. The only appetizers that were under that price were cheese based and spinach/artichoke based. I’m not paying $8 for dip. The steaks were pricey as well. $25 for a 12oz. steak and 4 pieces of shrimp? I know places that cook an amazing steak for $12. The price of my Pepperjack Bacon Stack Burger was reasonable, which surprised me the most because that’s one of their signature dishes.
—————————-
Environment: I could be wrong, but it didn’t seem like there were a lot of UFC fans there. We were sat close to the bar and everyone there was pretty quiet. Guys wearing Tapout shirts were getting up and leisurely going to the bathroom in the middle of the fight while the action was still going on. There were a couple times where someone like Dan Henderson landed a hook or an uppercut and you’d hear some applause, but not much other than that. If you’re looking for a chill and relaxed environment, then this is your place.
—————————-
Rating: 5/10. In the end, there was a negative for every positive. The wait was short and we had a good view of the TVs on such short notice, but they looked out of whack. The food was delicious, but the prices were a bit too high for your average college student. The beer was pretty cheap, but they didn’t even fill up the glass. Too many “buts” for me. This is the type of place where I wouldn’t throw in the mix of places to go watch the fights, but if enough people wanted to go there I wouldn’t argue.

Hope this was a helpful article. Have any feedback? Is there a factor in the sports bar experience I’m leaving out that you want me to include next month? Comment below.