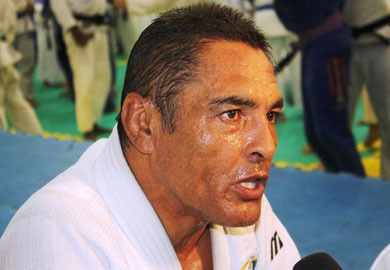 “Rickson had really prepped Royce, so whatever the problems they had that I wasn’t aware of had been put under the carpet. In a very real sense, Rickson had put his spine into Royce’s back. At the show, I heard later on from Todd Hester, the publisher and editor of Gladiator Magazine, that Royce had lost it in the rehearsal. He was down on his knees crying, and Rickson was cradling him like a father. He said Rickson was holding him, like a dad holds his son, and comforting him.”

“The three most unhappy guys (after UFC 1) at the Monster’s Ball on Saturday night were Pat Smith, who’d gotten caught in an ankle lock by Ken Shamrock, and Ken Shamrock, who couldn’t believe that a 175-pound guy in a gi had made him tap out. And the third guy was Rickson Gracie.”