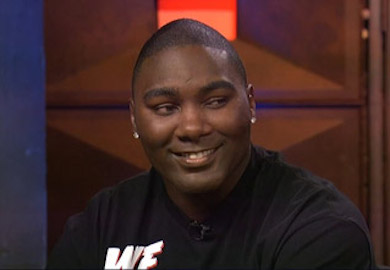 Anthony Johnson has been extremely critical of his former Blackzilian teammate Alistair Overeem, Johnson has told several stories of Overeem injuring training partners unnecessarily by going too hard in training.

When asked if he would fight Overeem, Johnson said that he had no problem fighting ‘The Reem’. Shortly after that interview, Overeem was KO’d by Ben Rothwell in the first round of their UFC Fight Night co-main event bout, leaving many fans to question if Overeem should drop to light heavyweight, the division Johnson fights for.

Anthony Johnson joined Ariel Helwani on The MMA Hour to expand on his desire to fight Overeem.

“I’ll fight him, I don’t care. I’ve already trained with him before. Why not? To me it’s just a fight. If the fans want to see it, I’m down to do it. I ain’t said no to any fight ever.”

“I’d meet him at a catchweight. If he wanted to meet me at 225, let’s do it. Or whatever, 220, I’d do that. Or I’d meet at 230 at the dot, if he was down to go that far. Let’s do it. Even if I fought him, it’s a dangerous fight. He’s still got weapons that are crazy. He was hitting Ben with some crazy knees. He’s a dangerous fighter still, but I’d definitely test him.”

“I don’t have anything against him as a fighter. I think he’s a beast when it comes to fighting. My things were other personal stuff. It was never his abilities, it was never that. I support him as a fighter, go out there and whip some ass, man. Do what you do. Give the fans what they want to see, make your money, go live life.”

“But other than that, that’s when I had an issue with him. I read a comment about [Overeem saying I was jealous]. Dude, there is nothing in the world I’m jealous of about him. Nothing. So I don’t know where he gets the jealousy stuff from, but if he feels that way, if he feels like somebody really wants to be jealous of him, then alrighty, you keep thinking that.”

Do you want to see this fight happen?