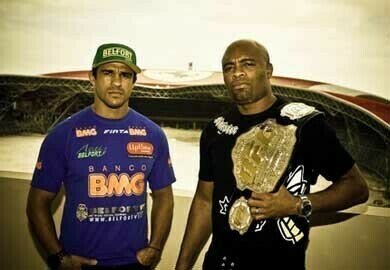 Anderson Silva is rooting for his hometown guy, and he is doing so admittedly against someone he calls a friend.

In a recent interview with Brazil’s SportTV, the UFC’s middleweight champion proclaimed that against all odds, he will be rooting for Vitor Belfort to upset Jon jones at UFC 152 later this month.

Check out what Anderson had to say:

“It’s difficult, because Jon Jones has a larger-than-normal wingspan and he’s still very young. He’s still in the phase where he’s playing during the fight, really, but he doesn’t have the responsibility of a champion. He fights with delight, jokingly, striking like I did back in 1930, when I started. Vitor has a great chance to defeat him. The biggest factor for Vitor is to use his explosiveness and his jiu-jitsu, where he is very good. But I think when one of them makes a mistake, the other will end up striking. As a Brazilian, I’ll be rooting for the Brazilian, even though I have a very good friendship with Jon Jones. Whenever I’m with him, I ask him to conduct his career in a different way, because he is very young and is always asking me something. But I’ll be rooting for Brazil, yes. May the best man win, but I’m rooting for Brazil.”