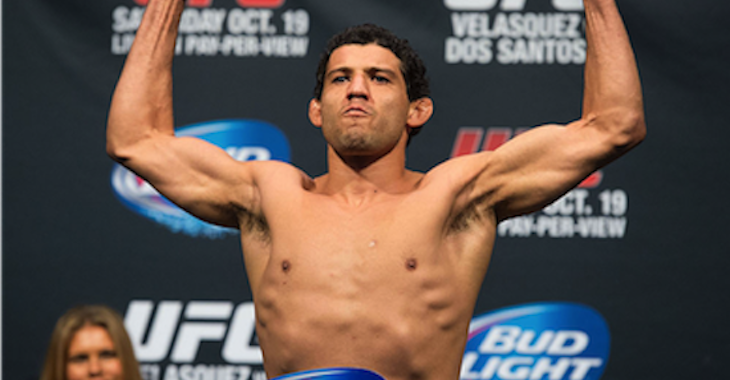 “El Nino” also noted that he would like the potential Alvarez fight to take place in Mexico City this June.

Alvarez initially responded to Melendez request by politely asking if the fight could take place in April instead of June, as he is eager to return to action.

Yesterday, Eddie was a guest on The MMA Hour where he shared his thoughts on “El Nino’s” recent comments about wanting to fight UFC featherweight Conor McGregor, as well as their potential bout:

“I feel the same (as Gilbert about wanting the fight). I don’t know about animosity, I just feel whatever. He’s the type of guy who, wasn’t he talking about fighting McGregor the other day? He likes, I’m not necessarily this guy now, that’s like in the headlines, but he’s the guy that if you’re making the headlines and you’re doing well, he likes to say he wants to fight you so he can also be in the headlines. The tweet I put out, I said I thought he was like the high school cheerleader that’s always trying to suck off the quarterback. It was awhile back but I really felt that way. If he’s not making the headlines, he says he wants to fight the guy who is. He always used to talk about fighting me. I just lost, but when I was doing well and on that streak. Whenever I would do well, Gilbert wants to fight me. When I didn’t do so well, he’d be like, ‘Oh, well I think he lost a step, I don’t want to fight him right now.’ But there is nothing to figure out, I think I understand who the better fighter is and I’m excited to go out there and show people, so hopefully this fight can get made so we can get it done.”

Alvarez went on to say that he would take the Melendez bout even over a shot at the title, just so they can finally settle the score:

“I just think it’s been too long, too controversial and I don’t know what this guy’s gonna do. He was going to go to Bellator, he had a chance to go to the DREAM tournament, I got in, so I didn’t get to fight him there. Then was the Strikeforce thing where I didn’t get to fight him. Then he was going to sign with Bellator, he didn’t and a part of me wanted to stay so I could get that fight. Finally, if this is really going to happen then let’s make it happen; let’s finish this thing. Everybody is tired of talking about it for years and years, lets finish this. The fight makes sense. I beat this guy every time out. With everything in me. I don’t know how he feels about his fight skills. But, the things he’s good at, his style, I’m better. I hit harder, I’m stronger and I’m faster. I just really want to hit this guy. I’m excited about it.”

Who do you see coming out on top if these two former lightweight champions finally lock horns? Sound off Penn Nation!