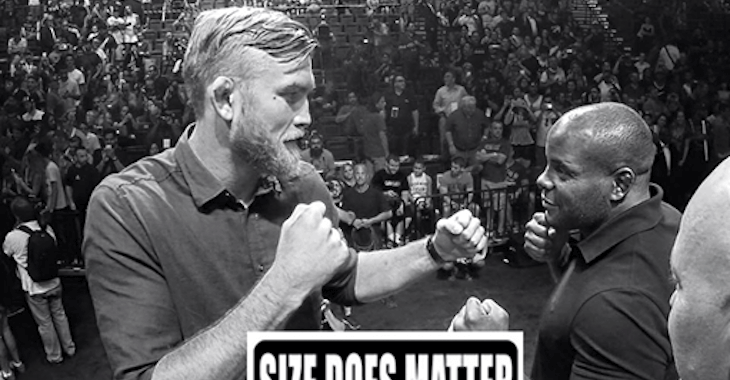 Before he chose to make the drop to light heavyweight, Daniel Cormier reigned supreme in the heavyweight division for nearly five years. Despite being outmatched in terms of height against fighters like Antonio “Bigfoot” Silva, Cormier remained undefeated and dominated any and all challengers that were sent his way. Now, Cormier is at the top of his game in the light heavyweight division with the gold slung over his shoulder, ready to defend his belt at “UFC 192” in Houston, Texas.

Size hasn’t been an issue for Cormier… until now apparently. Alexander Gustafsson is the man who will try to take Cormier’s championship this Saturday at “UFC 192” and is making it glaringly obvious he has plans to utilize his reach:

Sorry I'm the one that needs to break it down to you DC, but it's true what they say #sizedoesmatter #atleastthissaturday

Cormier will be walking into the cage measured at 5’11”, while Gustafsson towers over him at 6’5″. Do you think size will make a difference in this championship bout? Share your thoughts in the comment section below!