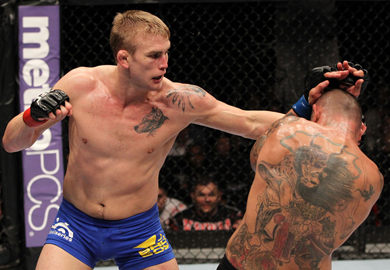 If fans think that UFC light-heavyweight champion, Jon Jones has his hands full with upcoming challenger, Alexander Gustafsson, try putting the shoe on the other foot.

Gustafsson is well prepared, at least mentally, at this stage in the pre-fight festivities, calling Jones the toughest test of his career:

“I see the greatest test in my career,”said Gustafsson on Tuesday at a press conference for the upcoming UFC 165 main event.

The 26-year old #1 contender is 15-1 in his professional MMA career, 7-1 in the UFC. Now, Gustafsson looks to add the most important spade to his tattoo which depicts both his triumphs and single defeat in MMA. He comes off of a December victory over former champion, Mauricio Rua, a fight he won by unanimous decision.

“I’m so pumped for this fight,” he said of his opponent, Jones.  “He’s a complete fighter.  He’s the champion.  I have to be aware of everything he throws.”