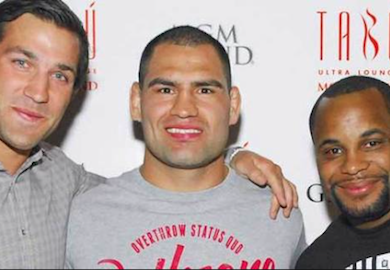 “I 100% expect Daniel [Cormier] to fight for the belt with a win. He’ll be the first one. Then the next will be Luke. I think Luke Rockhold needs [one win]. Then the next one could be Josh Thomson or Khabib.

[The fight with Benson Henderson] It wasn’t really a loss, it really wasn’t. And people should go “Josh Thomson is definitely top 4 in the world.” So one win should be enough for him.

We could potentially have four belts. I’m feeling pretty confident with all my guys. I think we have a great fighter in Luke Rockhold. And I think Daniel Cormier and Cain Valesquez in their divisions are far ahead of everyone else. If you don’t believe me just watch Daniel’s fights. He destroys everyone. He’s never lost a round. And Cain, he’s never lost a round except for that one fight he got knocked out by dos Santos. Besides that one moment, both of those guys combined have never lost a round.”