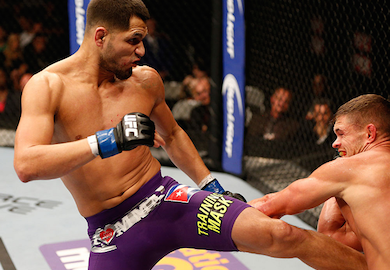 During last night’s post-fight presser, UFC on FOX !2 winner Jorge Masvidal again called out Donald Cerrone, wanting to fight the popular lightweight as a replacement for the injured Khabib Nurmagomedov.

Prior to his success on Saturday night, Masvidal told FOX Sports that a bout with Cerrone would be easy money.

“Because I’ll kick his ass. I want some easy money. He’s pretty tough against other guys that ain’t tough. I ain’t trying to act like a bad ass, but punching and kicking is part of the game. He hits people and they just start breaking all of a sudden before he knocks them out. I want to get in there and show him what’s up.”