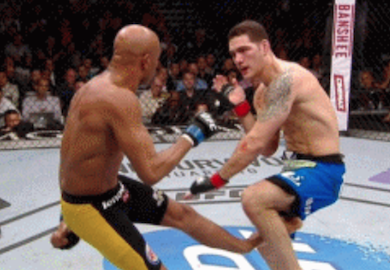 Silva was finding quick success with leg kicks early on in the second round until Weidman perfectly checked one of them. Unfortunately, the check was so effective that it broke Anderson Silva’s leg and made it look like rubber. It was a gruesome sight to see.

The bout was waved off after Anderson Silva fell to the ground and started screaming in pain.

“The Spider” was strapped to a stretcher and carried out of the octagon and was rushed to the hospital for emergency surgery.

At around 7:00 AM EST Sunday morning, the UFC released an update stating the Silva’s surgery was a success and he will not need a follow up procedure on his fibula.

“Following Saturday evening’s UFC 168 main event, former champion Anderson Silva was taken to a local Las Vegas hospital where he underwent surgery to repair a broken left leg. The successful surgery, performed by Dr. Steven Sanders, the UFC’s orthopedic surgeon, inserted an intramedullary rod into Anderson’s left tibia. The broken fibula was stabilized and does not require a separate surgery. Anderson will remain in the hospital for a short while, but no additional surgery is scheduled at this time. Recovery time for such injuries may vary between three and six months.

It is not likely that the three-to-six months of recovery is a timetable for the former UFC Middleweight Champion’s return to the octagon. It will simply take three-to-six months for the bone to heal properly. The injury that Anderson Silva suffered was extremely serious and will require months of physical therapy to bring his muscles back to full strength.