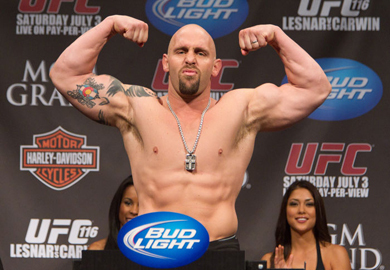 After sitting on the sidelines for nearly a year due to a back surgery, UFC heavyweight Shane Carwin has declared he is almost ready for an octagon return.

Upon his UFC debut back in 2008, it was clear that Carwin would pose a threat to whoever stood across from him in that cage. Carwin first caught the eyes of the top-tier heavyweights when he knocked out Gabriel Gonzaga at UFC 96. Despite eating a couple of solid punches, Carwin regained his composure and knocked Gonzaga out in the very first round. The performance earned him a shot at the Interim UFC Heavyweight Title against Frank Mir at UFC 111 in New Jersey. Once again, he defied the odds as the underdog and walked away with the belt around his waist.

In his latest blog, Carwin expressed how it was both a blessing and a curse to have the UFC Heavyweight Title with such little fighting time in the octagon.

“My entire career is shorter then some Pride Fights. I have somehow managed to contend for the UFC HW Title with less than an hour of actual fighting. On one hand that is amazing on the other it kind of scary to think I am facing seasoned veterans with limited experience. Talk about swimming with the sharks. The time off has allowed me to focus on me. Work on the fundamentals of the sport and improve. Maybe most important, to fall in love with the sport again.”

After his title victory, Shane Carwin went on to lose two hard fights against UFC Heavyweight Champion (at the time) Brock Lesnar and current UFC Heavyweight Champion Junior Dos Santos. While training for his fight at UFC 141, Carwin’s back locked up and discovered that the disk in his lower back was into his nerves. After the doctor gave him the options of either retiring or going under the knife, Carwin decided to undergo back surgery.

In his blog, he went on to reveal the timetable for his return which should be sometime around fall 2012.

“I informed UFC Matchmaker (Joe Silva) that I would like to fight in Early Fall 2012. I would like to be able to fight every three or four months. Barring injury I intend to leave the UFC octagon and head back to the Grudge Training Center to continue the climb. I have spent my entire career dealing with injuries sustained through Football. I am 100% and I feel like a younger version of my former self. The UFC should look into adding some padding in the gloves because I plan on crushing my opponents.”

Who do you think would be a good opponent for Shane Carwin’s return?