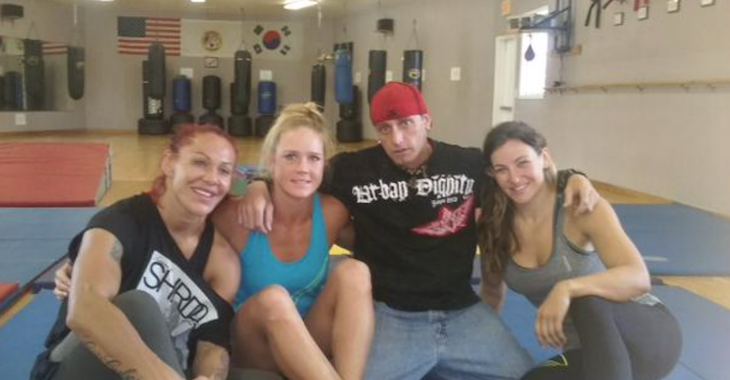 On a scale of one to ten, how awkward do you imagine this encounter being?

Miesha Tate, Cristiane ‘Cyborg’ and Holly Holm all together, hanging out, shooting a movie.

You have Holm, who just got announced as Ronda Rousey’s next opponent and Tate who was expecting to get another crack at the champ.

Then you have Cyborg who has called out Tate a few times and Tate has gladly accepted. Now, of course it’s possible for fighters to be pals outside of the business of fighting, but man, the timing just seems a little weird.

Holm will fight Rousey on Jan. 2 at UFC 195, Tate might also be on that card against Amanda Nunes, a fight Dana White would like to see, but nothing has been confirmed.

Cyborg is expected to eventually try to drop down to 135 in Invicta FC in order to prove she can make the weight before coming over to the UFC to face Rousey.

Check out the pics!