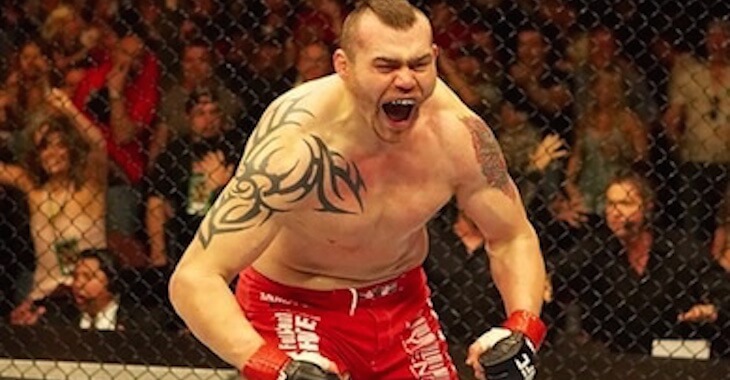 Former UFC heavyweight champion Tim Sylvia (31-10 MMA) was a recent guest on Chael Sonnen’s podcast, where he discussed a number of different topics, one of those being his departure from the UFC in July of 2008.

According to “The Maine-Iac”, who asked to be released by the UFC in order to fight for Affliction in 2008, the decision was a simple one based on money:

“I was very bitter, very pissed off. [UFC] said they were going to have me fight Cheick Kongo over in Europe and I said I wasn’t interested. I asked them to release me from my contract, they did and the next day I signed with Affliction.”

Tim Sylvia put together a modest 7-6-1 record outside of the UFC from 2008-2013, but blames UFC president Dana White for not being brought back in to the octagon:

“You know Dana White,” said Sylvia. “He’s just a f***ing d**k. He’s just holding a grudge. They’re pissed off because I went to support Affliction. I was sponsored by them for three years before that fight. Dana’s just a d**k. He holds grudges. They blackballed Andrei Arlovski, as well, but he was smart, went to a good camp, started picking and choosing who he fought and put eight or ten wins together. They had no choice but to bring him back to the UFC.”

“Look at him,” Sylvia said of Arlovski. “He’s top 10 again. I truly believe that if I hadn’t taken some dumb, stupid fights and stayed in shape I could have been back in the UFC and top 10, as well. Would I have won the title again? I don’t know. Probably not, but there’s still a lot of good fights for me out there. I could have fought Frank Mir, Antonio Rodrigo Nogueira, Stefan Struve, Matt Mittrione, Brendan Schaub.”

When asked if he could still compete with heavyweights on the current UFC roster Sylvia had this to say:

“There are so many guys in the top 10 who don’t even deserve it,” said Sylvia. “The UFC is over-saturated now with Ultimate Fighters. Events back to back to back. They’re just bringing in scabs. It’s not like it used to be when we were fighting back in the day when we had to earn our right to get into the UFC. I think it took me 15[13] fights to get into the UFC and I was undefeated.

“I’ve slowed down a little bit, but I’ve still got the punching power. If I was in shape? I’m top 20. No doubt about it.”

Do you think Tim Sylvia should have received another opportunity to compete under the UFC banner? Sound off Penn Nation!