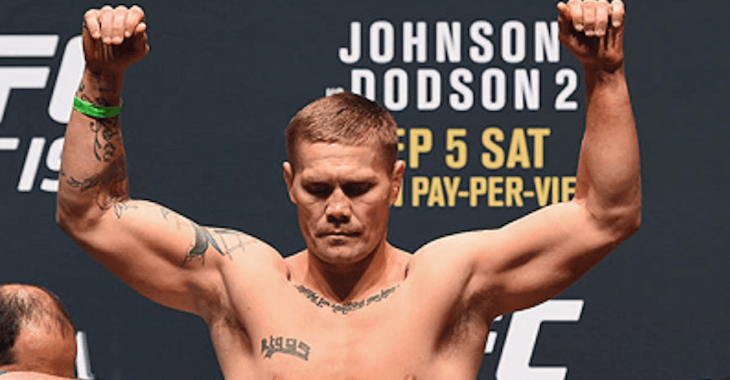 UFC middleweights Ron Stallings and Joe Riggs duked it out in the second fight of the night. Riggs raised eye brows yesterday when he missed weight by one and a half pounds after moving up in weight. He eventually weighed in again and managed to meet the limit.

Stallings came out and landed a few nice leg kicks early. Riggs eventually landed his own leg kick. Stalling went low for a big body punch. Stallings connected with a few amazing jabs. Riggs started grabbing at his eye. At first it looked like he might have got poked, but the referee didn’t step in. He kept touching around his eye. It was a pretty hard jab, it could have hurt him. Riggs goes down for a takedown. He gets Stalling down but right away Stallings throws his legs up and locks up a triangle choke. Riggs moved out, Stalling switched to an omoplata, Riggs tried to move out of that and Stallings used it to gain top position. Both fighters got to their feet, but Riggs moved in again and took Stalling down. He started working from Stalling’s full guard. Riggs looked to land big elbows. Stallings kicked him off and landed a big up kick that again caused Riggs to grab at his eye area. Riggs moved in and got top position before the round ended.

Riggs was clearly having a problem with his eye, but his corner kept telling the doctor that he was fine. Even at the start Riggs was wincing. They came out for the second and right away Riggs landed a monster punch that sent Stallings to the ground. He was hurt, Riggs moved in and took top position in full guard. He started landing hard thudding elbows. Stalling was cut. Stalling looked busted up. He attempted to control Riggs arms and wrists, but Riggs continued to land nasty elbows. Stallings managed to get some separation and lands another up kick. Riggs was down so the referee stopped the fight and stood Riggs up. He took him over and talked to him. Riggs kept saying his eye was messed up. Basically they blamed the up kick on the eye injury, even though it was clear the kick landed on the jaw. The doctor came in and looked at Riggs eye, Riggs kept saying he got kicked in the eye and couldn’t see. The doctor stopped the fight.

There was some confusion as to what the decision would be.