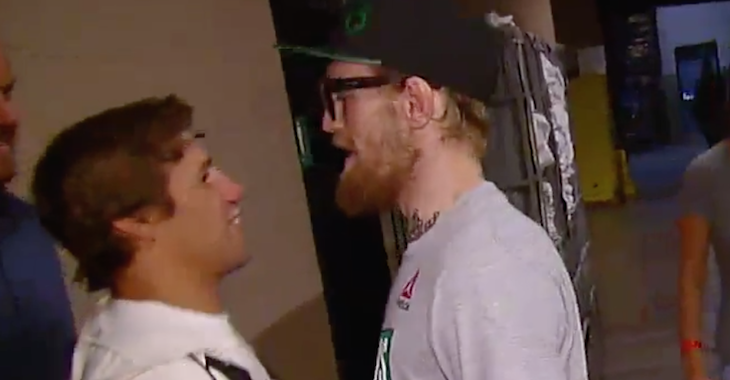 UFC’s Urijah Faber and Conor McGregor got into a bit of a situation yesterday before the weigh-ins.

McGregor responded in an interview, saying he could have taken Faber right there, and now Faber has a response.

Check it out, here’s what he said during a recent Periscope session.

“Okay, so what happened was I was in the bathroom, and somebody was trying to get in. I open the bathroom stall and McGregor was standing there, and we’re face to face. Then, so you saw the video. It was super random, just on the back hallway and there just happened to be a camera crew there.”

“Trying to pick on the guy who was cutting weight, but dude looked like a crackhead, man. He felt like a junior high girl when I grabbed him, to be honest. But I know he’s been cutting a lot of weight and he’ll be bigger tomorrow, but he’s not going to be enough for Chad.”