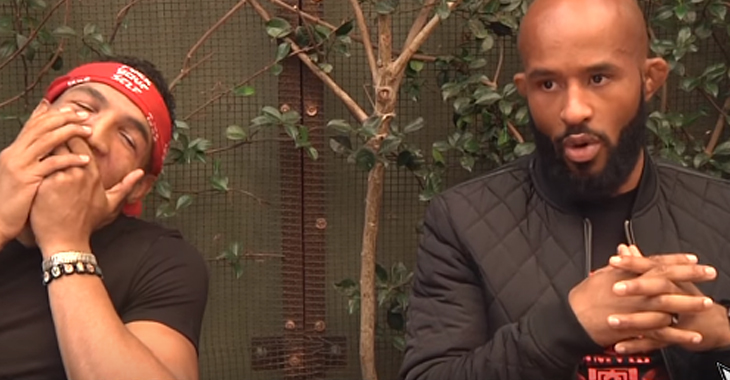 Fight week for fighters is a special kind of hell. You’re so close to the fight that you’ve prepared months for, but it’s just out of reach. You’re doing media, cameras are always around you, and worst of all, you’re cutting weight. Some fighters cut an obscene amount of weight. Conor McGregor went through a completely tame MMA cut in comparison to his others for the Floyd Mayweather fight, and Mayweather was worried he wouldn’t even make it to the fight. One guy who never worries about his cut, is Demetrious Johnson. In fact, he basically eats whatever he wants. He detailed his diet sitting next to Kevin Lee, who was visibly tortured and munching on arugula.

“I’ll stay at 125lbs. After this I probably won’t fight until March, maybe February or March possibly. We’ll see. I’ll stay at 125lbs. Last night I went out to dinner, had two chicken breasts with mashed potatoes, broccolini, it was seasoned, had all the good-goods on it. And I woke up weighing 138.1lbs. So, it’s not [a problem for me to make 125lbs]. the only time I get to like, 142-143lbs, is I have a rack of ribs with a delicious Negra Modelo. I eat whatever I want and still be able to make this weight. Yeah, I eat dessert and all this stuff. I had Oreos before I came down [to the media lunch]. I had chocolate ones because I ate through all the vanilla Oreos that day before.”

“So, for me being at 125lbs it’s not a problem. But if the money is right and if it makes sense for me to go up to fight at 135lbs, then yeah, I’ll entertain it. At the same time, those guys — the last time I talked to [Dominick Cruz], he said he got up to 165lbs. I was like, the biggest I’ve ever got was maybe 148lbs and that was after surgery because I couldn’t train. Other than that, I’ve never — when I’m active, drinking, eating whatever I want — never [got that big]. I may, after a full meal, come home at 146lbs but then the next morning I’m like 143-142lbs.” — Demetrious Johnson during the UFC 216 media lunch.

This is all fun and games here, but the more juicy morsel in all this — sorry Kevin Lee — is that it’s unlikely Demetrious Johnson will move up in weight. Even if he doubles up on breakfast and eats as much as a Hobbit, the heaviest he gets is featherweight, and that’s with him not training at all. He’s such a true flyweight that it makes it difficult to compete with the size advantage of most bantamweights, who cut down from feathweight, lightweight and above. If anyone can do it though, it’s Mighty Mouse.