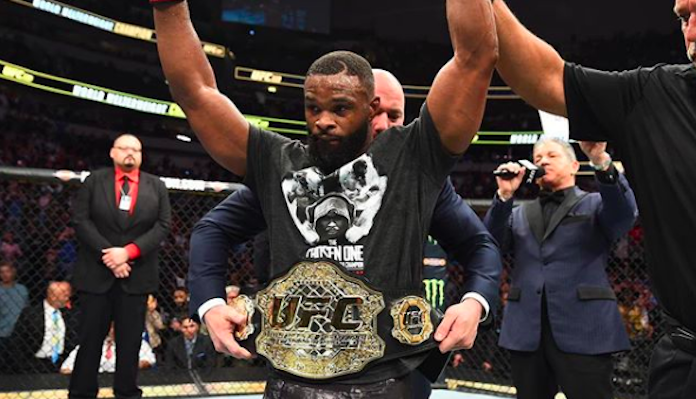 During a recent episode his Hollywood Beatdown show on TMZ Sports, Woodley fired another verbal volley at Adesanya, and also explained why he believes he’d defeat the middleweight champ in a fight.

He began be reiterating that he didn’t initially have anything against Adesanya — though that has changed now.

“In addition to trying to stay ‘rona free, I’m trying to stay f*ckboy free too, and it seems like there’s a lot of that going on in the UFC,” Woodley began (transcript via MMA Fighting).

“Israel Adesanya, we can start with him because he’s probably got the most juice right now out of all the fighters. . . So the question that was posed to me – and it’s been asked many, many times – would I ever move up to go to middleweight? And my answer is yes,” Woodley added. “My answer’s gonna be yes whether Israel’s f*cking sitting next to me, it’s gonna be yes whether Dana asks me, or a f*cking person from around the corner, Sam sausage-head from the alley. No matter who asks me, I’m gonna say yes because if you want to be one of the best fighters on Earth, you have to fight the best. Many fighters have bumped up weight classes, dropped down weight classes, and shuffle around to prove that they’re the baddest man alive. They’ve done it in boxing, they’ve done it in mixed martial arts, you see that theme that fighters are trying to attack that double belt in the UFC. So of course.

“How many times have I said that Israel Adesanya, he’s a stud, he’s a star, and given him kudos? A lot,” Woodley continued. “So I think he took it personal. He’s really sensitive and when somebody starts getting in their feelings — I had the same situation with Robbie Lawler — that means there’s a little b*tch in the blood, and now I want to test it out.”

Tyron Woodley continued, explaining why he believes he has the skills to beat Adesanya in a fight. He used their respective fights with Kelvin Gastelum to make his point.

Do you think Tyron Woodley has the skills to beat Israel Adesanya?