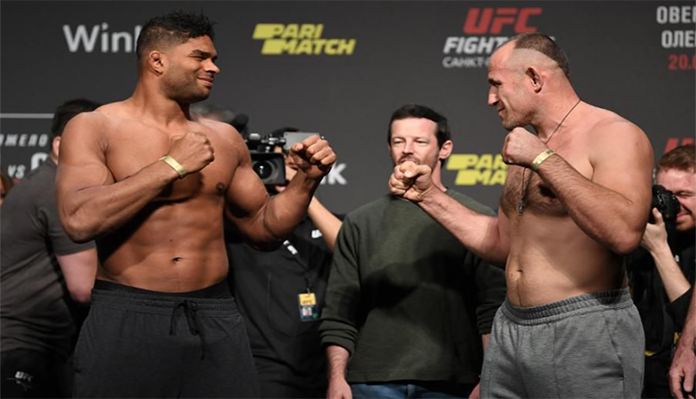 UFC St. Petersburg is in the books. Seven Russian fighters got their hand raised and a familiar heavyweight contender cemented his position in the ranks.

The second trip to Russia proved beneficial for the Ultimate Fighting Championship. The fights were entertaining with more than half of the 11 fights scheduled ending in a finish.

After more than two years away from the Octagon Magomed Mustafaev returned to competition in St. Petersburg. He needed only 1:26 to finish Rafael Fiziev with a beautiful spinning back kick followed by strikes.

Its a massive win for the Russian-born Mustafaev who’s only loss in the UFC is to Kevin Lee. If he can stay healthy and active Mustafaev could potentially make some waves in the lightweight division.

While the Russian fighters owned the night they weren’t the only nationality to show out in St. Petersburg as Poland’s Michal Oleksiejczuk looked fantastic in his winning performance.

From the early moments of his fight against Gadzhimurad Antigulov, you could see “Lord’s” boxing advantage. Oleksiejczuk’s hands have never looked better and this win should net the 26-year-old a top 15 light heavyweight in his next outing.

After a terrible UFC debut, it looks like Sergey Pavlovich is back to his winning ways.

Pavlovich looked like his old self last weekend as he made it look easy against Marcelo Golm. 1:06 is all Pavlovich needed to get his hand raised.

Now that Pavlovich has seemingly shaken off any UFC jitters, it would make sense to pair him up with a top 15 heavyweight to see where the Russian stacks up in the division.

Alistair Overeem continues to reinvent himself every few years. “The Demolition Man” knocked off Alexey Oleinik in UFC St. Petersburg’s main event over the weekend.

That makes it two wins in a row for Overeem after losing back to back outings to Francis Ngannou & Curtis Blaydes.

Overeem, who already enjoys the No. 7 heavyweight rank, will improve upon his position when the weekly ranking update. Perhaps “The Reem” knows something we don’t, as he said in his post-fight interview that another fight could be right around the corner.