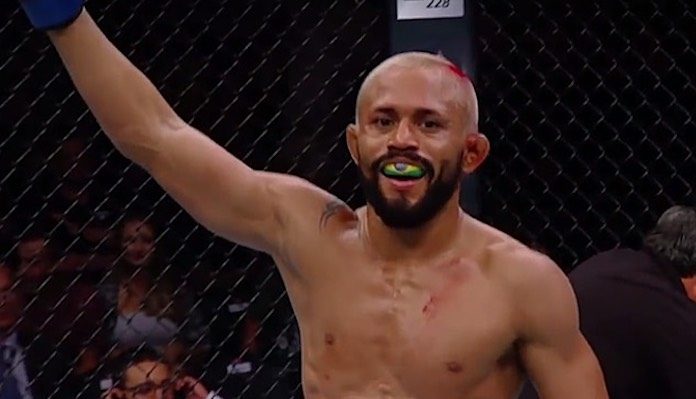 Figueiredo (20-1 MMA) captured the promotions vacant flyweight title this past July on Fight Island when he scored a first-round submission victory over Joseph Benavidez.

Meanwhile, Alex Perez (24-6 MMA) entered tonight’s event headliner on a three-fight win streak, his latest being a TKO victory over Jussier Formiga at UFC 250. The American had gone 11-1 over his past twelve fights overall, with his lone loss in that time coming to Joesph Benavidez by way of TKO.

Tonight’s UFC 255 main event did not last long as Deiveson Figueiredo was able to make a crafty transition from a leg lock to a fight-ending guillotine submission in the early moments of the opening round. Alex Perez had no force but to tapout after the champ readjusted his grip.

Check out how the pros reacted to Figueiredo defeating Perez below:

HE GRABBED THE CAGE TWICE!! AND THEN REVERSED THE POSITION!! I don’t have a dog in the race but that’s fucking bullshit! #UFC255

@Cody_Nolove Will be ready in March congratulation to the champ

Who would you like to see Deiveson Figueiredo fight next following his submission victory over Alex Perez this evening in Las Vegas? Share your thoughts in the comments section PENN Nation!