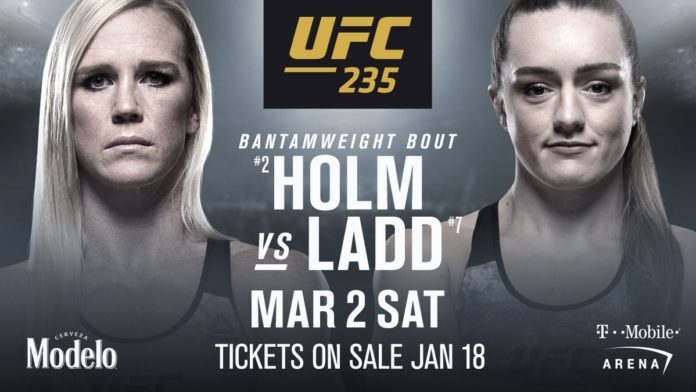 On Thursday, the UFC held their first pre-fight press conference for the big UFC 235 card that will go down on March 2 in Las Vegas, Nevada.

As fun as it was, we got some surprising news.

During the UFC 235 pre-fight press conference when asked about why the bantamweight bout between rising contender Aspen Ladd (7-0) and former champion Holly Holm (12-4) wasn’t featured on the panel, UFC President Dana White revealed that the bout was now off.

White said that each fighter will have new opponents for different events. No reasons as to why were given.

For Holm, this was to be her first fight at bantamweight since her win over Bethe Correia in July 2017. Since then she has gone 1-1 with both of those fights coming at featherweight.

Ladd, on the other hand, recently dominated her toughest test to date in former Invicta FC champion Tonya Evinger who she defeated via first-round TKO.

On top of this news, it’s also news to Ladd herself reports Mike Heck.

“I reached out to Aspen Ladd’s team about what Dana White just said: ‘News to me, seriously.'” Heck’s tweet read.

As of right now, we can only speculate what the next fights will be for each but it wouldn’t be crazy to imagine Holm getting another title shot at 135-pounds as both she and the champion Amanda Nunes expressed interest in fighting one another.

Despite this hit to UFC 235, it remains a very stacked card as the lineup can be seen below.